By the Shores of Silver Lake (Little House #5) (Paperback) 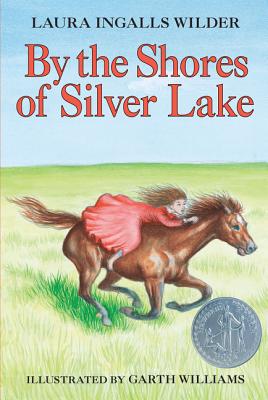 This is book number 5 in the Little House series.

Based on the real-life adventures of Laura Ingalls Wilder, By the Shores of Silver Lake is the fifth book in the award-winning Little House series, which has captivated generations of readers. This edition features the classic black-and-white artwork from Garth Williams.

The adventures of Laura Ingalls and her family continue as they move from their little house on the banks of Plum Creek to the wilderness of the unsettled Dakota Territory. Here Pa works on the new railroad until he finds a homestead claim that is perfect for their new little house. Laura takes her first train ride as she, her sisters, and their mother come out to live with Pa on the shores of Silver Lake. After a lonely winter in the surveyors' house, Pa puts up the first building in what will soon be a brand-new town on the beautiful shores of Silver Lake. The Ingallses' covered-wagon travels are finally over.