The Digital Silk Road: China's Quest to Wire the World and Win the Future (Hardcover) 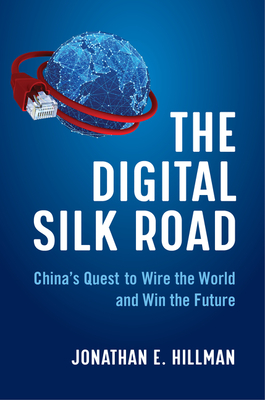 An expert on China’s global infrastructure expansion provides an urgent look at the battle to connect and control tomorrow’s networks.

From the ocean floor to outer space, China’s Digital Silk Road aims to wire the world and rewrite the global order. Taking readers on a journey inside China’s surveillance state, rural America, and Africa’s megacities, Jonathan Hillman reveals what China’s expanding digital footprint looks like on the ground and explores the economic and strategic consequences of a future in which all routers lead to Beijing.

If China becomes the world’s chief network operator, it could reap a commercial and strategic windfall, including many advantages currently enjoyed by the United States.

It could reshape global flows of data, finance, and communications to reflect its interests. It could possess an unrivaled understanding of market movements, the deliberations of foreign competitors, and the lives of countless individuals enmeshed in its networks.

However, China’s digital dominance is not yet assured. Beijing remains vulnerable in several key dimensions, the United States and its allies have an opportunity to offer better alternatives, and the rest of the world has a voice. But winning the battle for tomorrow’s networks will require the United States to innovate and take greater risks in emerging markets. Networks create large winners, and this is a contest America cannot afford to lose.

Jonathan E. Hillman is a senior fellow with the economics program at the Center for Strategic and International Studies, the director of the Reconnecting Asia Project, and the author of The Emperor’s New Road: China and the Project of the Century. He won the Financial Times/McKinsey & Company Bracken Bower Prize in 2019 and is a graduate of the Harvard Kennedy School and Brown University. He lives in Washington, DC.

“A timely and fascinating account of how China is shaping the digital universe, redrawing the connections that carry data from the ocean floor to outer space, and harnessing the means by which both commerce and warfare will increasingly be conducted, framed in a century-defining contest for control.” — Ambassador Charlene Barshefsky, former U.S. trade representative

“Essential reading for understanding one of the greatest geostrategic challenges of our age: China’s technological rise and global push to dominate the vital systems upon which militaries, markets, and modern societies depend.” — Admiral James Stavridis, sixteenth supreme allied commander at NATO and author of 2034: A Novel of the Next World War

“An urgent, engaging look at China’s push to build digital influence and leverage, project by project, as it makes a play for global dominance.” — Ambassador Jon M. Huntsman Jr.

"A probing look at China’s quest to dominate the technosphere. . . . Hillman refutes the notion that with internet connectivity comes increased freedom. . . . A cogent warning that the West has much work to do if it is to contain Chinese expansion into cyberspace." — Kirkus Reviews

“Hillman warns against complacency and underestimating China's technological ambitions. His writing is lucid and nuanced, and his warning that America needs to wake up is timely and compelling.” — Booklist

“Fine prose and telling case studies...take the time to dive deep into this well-written account of the biggest technological transformation of the 21st century.” — Financial Times