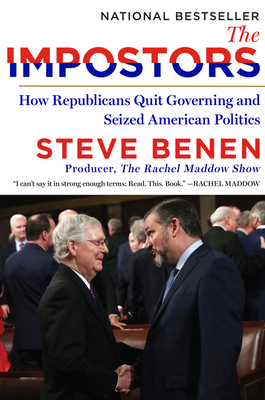 NATIONAL BESTSELLER now in paperback, updated with a new afterword

“This is the definitive account of what has gone wrong in our two-party system, and how our democracy has to adapt to survive it. I can't say it in strong enough terms: Read. This. Book.” —RACHEL MADDOW

The award-winning producer of The Rachel Maddow Show exposes the Republican Party as a gang of impostors, meticulously documenting how they have abandoned their duty to govern and are gravely endangering America

For decades, American voters innocently assumed the two major political parties were equally mature and responsible governing entities, ideological differences aside. That belief is due for an overhaul: in recent years, the Republican Party has undergone an astonishing metamorphosis, one so baffling and complete that few have fully reckoned with the reality and its consequences.

Republicans, simply put, have quit governing. As MSNBC's Steve Benen charts in his groundbreaking new book, the contemporary GOP has become a "post-policy party." Republicans are effectively impostors, presenting themselves as officials who are ready to take seriously the substance of problem solving, but whose sole focus is the pursuit and maintenance of power. Astonishingly, they are winning–at the cost of pushing the political system to the breaking point.

Despite having billed itself as the "party of ideas," the Republican Party has walked away from the hard but necessary work of policymaking. It is disdainful of expertise and hostile toward evidence and arithmetic. It is tethered to few, if any, meaningful policy preferences. It does not know, and does not care, about how competing proposals should be crafted, scrutinized, or implemented. This policy nihilism dominated the party's posture throughout Barack Obama's presidency, which in turn opened the door to Donald Trump -- who would cement the GOP's post-policy status in ways that were difficult to even imagine a few years earlier.

The implications of this approach to governance are all-encompassing. Voters routinely elect Republicans such as Mitch McConnell and Ted Cruz to powerful offices, expecting GOP policymakers to have the technocratic wherewithal to identify problems, weigh alternative solutions, forge coalitions, accept compromises, and apply some level of governmental competence, if not expertise. The party has consistently proven those hopes misguided.

The result is an untenable political model that's undermining the American policymaking process and failing to serve the public's interests. The vital challenge facing the civil polity is coming to terms with the party's collapse as a governing entity and considering what the party can do to find its policymaking footing anew.

The Impostors serves as a devastating indictment of the GOP's breakdown, identifying the culprits, the crisis, and its effects, while challenging Republicans with an imperative question: Are they ready to change direction? As Benen writes, "A great deal is riding on their answer."

STEVE BENEN is a producer on The Rachel Maddow Show and the author of The MaddowBlog. Benen’s articles and op-eds have appeared in the New York Times, Washington Monthly, The American Prospect, Salon.com, and other publications. For his work on TRMS, he has received two Emmy Awards, and has been nominated for three more. He lives in Vermont.

“There is nobody who is writing in an episodic, daily way, in any medium, anywhere in the world, who has more influence on the way I think about politics than Steve Benen.”
— Rachel Maddow

"A terrific read. ... Excellent. ... Irrefutable. ... There is so much good stuff in there that it would be impossible to select enough excerpts to do it justice.... It’s a must-have, in that it’s important to have all of this in one place in order to understand what happened, how, and why."
— Daily Kos

“Through countless ripped-from-the-headlines examples, ‘The Impostors’ paints a grim picture of a political party in which the kids have taken over the grown-up table and the responsible adults are nowhere to be seen.”
— Washington Post

"A staggering chronicle of Republican duplicity. ... A skillful illustration of how rank cynicism allowed Donald Trump to easily take control of the Republican Party."
— Washington Monthly

"Thoroughly researched. ...  Ably lays out the many disturbing trends in the Republican political arena, making a convincing case for his argument that the GOP has “quit governing” and now merely focuses on attaining and wielding power or simply negating any progress made by Democrats. ... A clear-eyed argument that 'strategy and governing [have] been replaced by instincts and partisan id.'"