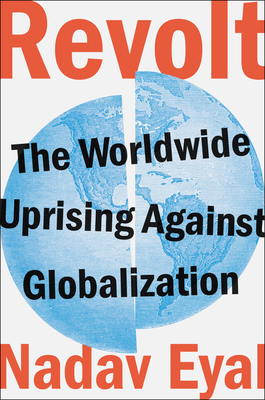 "A well-written and thought-provoking account of the current crisis of globalization. Not everyone will agree with Eyal's interpretation, but few will remain indifferent." —Yuval Noah Harari, author of Sapiens

Revolt is an eloquent and provocative challenge to the prevailing wisdom about the rise of nationalism and populism. With a vibrant and informed voice, Nadav Eyal illustrates how modern globalization is not sustainable. He contends that the collapse of the current world order is not so much about the imbalance between technological achievement and social progress or the breakdown of liberal democracy as it is about a passion to upend and destroy power structures that have become hollow, corrupt. or simply unresponsive to urgent needs. Eyal illuminates the benign and malignant forces that have so rapidly transformed our economic, political, and cultural realities, shedding light not only on the economic and cultural revolution that has come to define our time but also on the counterrevolution waged by those it has marginalized and exploited.

With a mixture of journalistic narrative, penetrating vignettes, and original analysis, Revolt shows that the left and right have much in common. Eyal tells stories of distressed Pennsylvania coal miners, anarchist communes on the outskirts of Athens, a Japanese town with collapsing fertility rates, neo-Nazis in Germany, and Syrian refugee families whom he accompanied from the shores of Greece to their destination in Germany. Into these reports from the present Eyal weaves lessons from the past, from the opium wars in China to colonialist Haiti to the Marshall Plan. With these historical ties, he shows that the revolts’ roots have always been deep and strong, and that rather than seeing current uprisings as part of a passing phenomenon, we should recognize that revolt is the new status quo.

Nadav Eyal is one of Israel’s most well-known journalists, and a winner of the Sokolov Prize, Israel’s Pulitzer. He is the chief international correspondent for Israel’s Reshet News, and an opinion writer for Yediot Aharont, Israel’s most circulated newspaper. In 2016, several months before the presidential elections, Eyal aired Trumpland, a series of short documentaries detailing the grievances haunting America, specifically the rust belt. These received much attention for presenting the prospect of a Trump victory. He holds an LLB from the Law Faculty at Hebrew University in Jerusalem and a master’s degree in global politics from the London School of Economics.

“With dispatches from around the globe, Nadav Eyal explores why so many people are rejecting interdependence, even at a time when we need each other more than ever. The message is clear that we need to redefine the terms of our interdependence—to minimize the dangers, spread the benefits more broadly, and build a global community capable of confronting our collective challenges together.”

"A well-written and thought-provoking account of the current crisis of globalization. Not everyone will agree with Eyal's interpretation, but few will remain indifferent."
— Yuval Noah Harari, author of Sapiens

“In a world that is changing--politically, culturally, religiously, economically--more rapidly than we once imagined possible, Nadav Eyal’s Revolt offers a riveting and convincing argument that what is unfolding is an international revolt against globalization and the elites at its helm. At stake, he argues, is nothing less than progress itself. Revolt is the book we have long needed to spark a critically important conversation about the future of our freedom.”
— Daniel Gordis, Koret Distinguished Fellow at Shalem College in Jerusalem and author of Israel: A Concise History of a Nation Reborn