The Education of an Idealist: A Memoir (Large Print / Paperback) 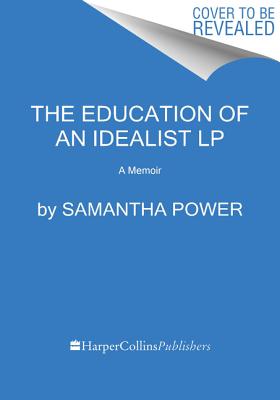 “Her highly personal and reflective memoir . . . is a must-read for anyone who cares about our role in a changing world.”—President Barack Obama

In her memoir, Power offers an urgent response to the question "What can one person do?" and a call for a clearer eye, a kinder heart, and a more open and civil hand in our politics and daily lives. The Education of an Idealist traces Power’s distinctly American journey from immigrant to war correspondent to presidential Cabinet official. In 2005, her critiques of US foreign policy caught the eye of newly elected senator Barack Obama, who invited her to work with him on Capitol Hill and then on his presidential campaign. After Obama was elected president, Power went from being an activist outsider to a government insider, navigating the halls of power while trying to put her ideals into practice. She served for four years as Obama’s human rights adviser, and in 2013, he named her US Ambassador to the United Nations, the youngest American to assume the role.

Power transports us from her childhood in Dublin to the streets of war-torn Bosnia to the White House Situation Room and the world of high-stakes diplomacy. Humorous and deeply honest, The Education of an Idealist lays bare the searing battles and defining moments of her life and shows how she juggled the demands of a 24/7 national security job with the challenge of raising two young children. Along the way, she illuminates the intricacies of politics and geopolitics, reminding us how the United States can lead in the world, and why we each have the opportunity to advance the cause of human dignity. Power’s memoir is an unforgettable account of the power of idealism and of one person’s fierce determination to make a difference.

“This is a wonderful book. […] The interweaving of Power’s personal story, family story, diplomatic history and moral arguments is executed seamlessly and with unblinking honesty.”—THOMAS L. FRIEDMAN, The New York Times Book Review

“Honest, personal, revealing… about the development of a young woman’s inner strength and self-knowledge.”—COLM TÓIBÍN, author of Brooklyn and Nora Webster

Samantha Power is the Anna Lindh Professor of the Practice of Global Leadership and Public Policy at Harvard Kennedy School and the William D. Zabel Professor of Practice in Human Rights at Harvard Law School. From 2013 to 2017, Power served in the Cabinet of President Barack Obama and as US Ambassador to the United Nations. From 2009 to 2013, Power worked on the National Security Council as Special Assistant to the President for Multilateral Affairs and Human Rights. Power’s book “A Problem from Hell”: America and the Age of Genocide won the Pulitzer Prize in 2003. She is also the author of the New York Times bestseller Sergio: One Man’s Fight to Save the World. Power began her career as a journalist reporting from countries including Bosnia, East Timor, Rwanda, and Sudan, and she has been named by TIME as one of the world’s 100 Most Influential People and by Forbes as one of the World’s 100 Most Powerful Women. She immigrated to the United States from Ireland as a child, and lives in Massachusetts with her husband, Cass Sunstein, and their two children.

“This is a wonderful book.…The interweaving of Power’s personal story, family story, diplomatic history and moral arguments is executed seamlessly—and with unblinking honesty.”

“[Power] is a very good writer, which makes it more fun and truly engrossing to read a memoir about a former U.S. official….A pleasure to read.”
— RACHEL MADDOW, MSNBC

“Power writes movingly about everything…and she delivers one of the best-written political memoirs of recent years.”
— FAREED ZAKARIA, CNN

“Power writes with heart about her upbringing — in Ireland, Pittsburgh and Atlanta — and she is especially poignant when recounting a few traumatic episodes… Still, the book is suffused with humor, and [President Obama] furnishes the funniest anecdotes that don’t come from her charming children…The Education of an Idealist is a moving account of how to serve righteously, or at least how to try.”
— The Washington Post

“Amid the flood of memoirs from Obama administration veterans, Power’s stands out as worth reading. For starters, she’s a better writer than a lot of them—she was a Pulitzer Prize–winning journalist and author long before she got into government. She’s also done more that’s worth reading about. Like the best journalists, Power has a gift for finding the perfect anecdote to illustrate a larger idea or theme, and this is the rare political memoir where you definitely shouldn’t skim the “early years” chapters.
— Slate

“Engaging….Power’s memoir is an insider’s account of foreign-policy-making, and an intensely personal one.”
— The Economist

“Lively…and strikingly personal…[Power] writes vividly and lucidly here about her turn in the international spotlight.”
— Vogue

"Power is a master story-teller . . . a brilliant self-portrait of an outsider turned insider, who is forced to grapple with the challenges that brings, and does so honestly."
— The Independent (Ireland)

"A uniquely personal and absorbing account of [Power's] time at the heart of US foreign policy . . . Power's book gives a riveting fly-on-the wall insight into the Obama administration's foreign-policy decision-making and the inner workings of the United Nations."
— The Irish Times

“In this gripping and revelatory memoir, Power chronicles, with vibrant precision and stunning candor, her best and worst moments navigating the obstacle courses within the White House and the UN, daunting global crises, and personal struggles. She is utterly compelling in her eye-witness accounts of violence and political standoffs and shrewdly witty in her tales about balancing diplomacy and motherhood.”
— Booklist, starred review

&#8220An illuminating and engaging account of [Power’s] journey from would-be sports journalist to award winning author, from Irish immigrant to presidential cabinet member… This engrossing memoir will appeal to informed readers and will inspire women contemplating careers in public service.”
— Library Journal

“Samantha Power’s captivating memoir is a rare and intimate revelation of the inner workings of international diplomacy as well as a heartening beacon of a book for young women and men everywhere. Its stories of dignity, kindness, empathy, and inclusiveness are needed today as never before.”
— DORIS KEARNS GOODWIN, presidential historian and Pulitzer Prize–winning author

“Problem solving in a complex world can challenge idealism. Samantha Power’s compelling memoir provides critically important insights we should all understand as we face some of the most vexing issues of our time.”
— BRYAN STEVENSON, founder and executive director of the Equal Justice Initiative and author of Just Mercy

“Samantha Power’s memoir gives a candid, self-questioning, intensely personal view of what goes on inside. It should inspire others to test their ideals against the unforgiving world.”
— GEORGE PACKER, author of The Unwinding and Our Man

“A celebrated writer and an accomplished diplomat, Samantha Power is one of the most outspoken and important voices in world affairs today. Her absorbing, heartfelt, and remarkably candid memoir provides vivid new details about the difficult strategic questions that arose during her years in the Obama administration, and offers essential lessons to anyone aspiring to follow in her footsteps in shaping the world for the better.”
— Secretary of State MADELEINE ALBRIGHT

“Samantha Power’s book is honest, personal, revealing. It is about the development of a young woman’s inner strength and self-knowledge. But it is also a political book, alert to both the power of political will and its limitations. It is the journey of an idealist, whose conscience was forged in Bosnia, into the corridors of power where compromise does battle with commitment. It is the story of someone with the soul of an outsider becoming, as an insider, a passionate witness to events in the White House and the United Nations during the Obama years.”
— COLM TÓIBÍN, author of Brooklyn and Nora Webster

"Refreshingly frank and self-deprecating, Power's memoir is an energizing reminder that conscience has a place in the process of shaping foreign policy."
— TIME