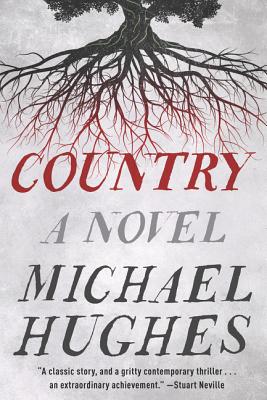 By Michael Hughes
$26.99
On Our Shelves Now - Please allow up to 48-hours for Curbside Pickup orders to be processed.

Published to ravishing acclaim in the UK, a fierce and suspenseful reimagining of Homer’s Iliad set in mid-1990s Northern Ireland—a heart pounding tale of honor and revenge that “explodes with verbal invention, rapid juxtaposition, brutality and fun” (Times Literary Supplement).

After twenty-five years of vicious conflict, the IRA and the British have agreed to an uneasy ceasefire as a first step towards lasting peace. But, faced with the prospect that decades of savage violence and loss have led only to smiles and handshakes, those on the ground in the border country question whether it really is time to pull back—or quite the opposite.

When an IRA man’s wife turns informer, he and his brother gather their comrades for an assault on the local army base. But old grudges boil over, and the squad's feared sniper, Achill, refuses to risk his life to defend another man’s pride. As the gang plots without him, the British SAS are sent to crush the rogue terror cell before it can wreck the fragile truce and drag the region back to the darkest days of the Troubles. Meanwhile, Achill’s young protégé grabs his chance to join the fray in his place…

Inspired by the oldest war story of them all, Michael Hughes’s virtuoso novel explores the brutal glory of armed conflict, the cost of Ireland’s most uncivil war, and the bitter tragedy of those on both sides who offer their lives to defend the dream of country.

Michael Hughes grew up in a small town in Northern Ireland. A graduate of Oxford, he also trained in theatre at the Jacques Lecoq School in Paris. He has worked for many years as an actor under the professional name Michael Colgan, and he also teaches creative writing. He lives in London with his wife, the acclaimed historian Tiffany Watt Smith, and their two children. His first novel, The Countenance Divine, was published by John Murray/Hachette UK in 2016.

“A propulsive, blood-flecked homage to the 'Iliad' told against the backdrop of a fragile truce in 1996…Hughes’s story proceeds at a breakneck cinematic pace.”
— New York Times Book Review

“A lively, convincing demotic that captures an Irish idiomatic flow and an echo of Homer’s formalities and hexametric lines. It begs to be read aloud.”
— The Times (UK)

“The language is enough to keep you enthralled . . . a violent pounding demotic as memorable in its way as Homer’s hexameter.”
— The Guardian

“Energetic . . . an ingenious refitting that illuminates both conflicts.”
— Guardian, Books of the Year 2018

“Country explodes with verbal invention, rapid juxtaposition, brutality and fun . . . Hughes’s linguistic dexterity, his ear for dialogue, his understanding of character, the energy of his prose.“
— Times Literary Supplement (London)

“Reading this book is like sitting in the pub listening to a good friend tell you stories. It does what only the best retellings can and makes you see the myth anew.”
— Daisy Johnson, author of Everything Under

“This is a hard, rigorous and necessary book which grinds out its beauty as the song cycles of empire and resistance fall silent, choked in their own blood.”
— Irish Times

“A brutal and gripping thriller in its own right . . . a consistently engrossing read, written in Ulster-flavoured prose as rich and evocative as you would expect from a professional thespian.”
— Irish Independent

“Consistently thrilling . . . By enlisting the visceral power of The Iliad to illustrate the violence of the Troubles . . . Hughes has written a striking, memorable book.”
— Literary Review

“Prose that crackles with the vernacular of hard men, yet remains compulsively readable throughout . . . a classic story, and a gritty contemporary thriller, this book is an extraordinary achievement.”
— Stuart Neville, author of The Ghosts of Belfast

“Hughes’s clever conceit in this dark take on political violence—the Irish author’s American debut—is to transport The Iliad from ancient Troy to Northern Ireland in the mid-’90s, during a cease-fire between the IRA and the British… A canny update of one of the world’s oldest stories.”
— Publishers Weekly

“A story of violence and betrayal so urgent that you may miss your subway stop reading it… The voltage in this book comes from all the way from prehistory and it sparks to life again in Hughes’s gifted hands… he has something world-shaking to say and he has found the perfect medium through which to say it.”
— Irish Central