Missed Translations: Meeting the Immigrant Parents Who Raised Me (Hardcover) 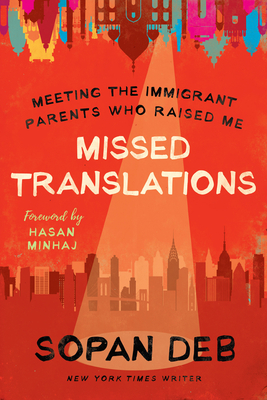 A bittersweet and humorous memoir of family—of the silence and ignorance that separate us, and the blood and stories that connect us—from an award-winning New York Times writer and comedian.

Approaching his 30th birthday, Sopan Deb had found comfort in his day job as a writer for the New York Times and a practicing comedian. But his stage material highlighting his South Asian culture only served to mask the insecurities borne from his family history. Sure, Deb knew the facts: his parents, both Indian, separately immigrated to North America in the 1960s and 1970s. They were brought together in a volatile and ultimately doomed arranged marriage and raised a family in suburban New Jersey before his father returned to India alone.

But Deb had never learned who his parents were as individuals—their ages, how many siblings they had, what they were like as children, what their favorite movies were. Theirs was an ostensibly nuclear family without any of the familial bonds. Coming of age in a mostly white suburban town, Deb’s alienation led him to seek separation from his family and his culture, longing for the tight-knit home environment of his white friends. His desire wasn’t rooted in racism or oppression; it was born of envy and desire—for white moms who made after-school snacks and asked his friends about the girls they liked and the teachers they didn’t. Deb yearned for the same.

Deb’s experiences as one of the few minorities covering the Trump campaign, and subsequently as a stand up comedian, propelled him on a dramatic journey to India to see his father—the first step in a life altering journey to bridge the emotional distance separating him from those whose DNA he shared. Deb had to learn to connect with this man he recognized yet did not know—and eventually breach the silence separating him from his mother. As it beautifully and poignantly chronicles Deb’s odyssey, Missed Translations raises questions essential to us all: Is it ever too late to pick up the pieces and offer forgiveness? How do we build bridges where there was nothing before—and what happens to us, to our past and our future, if we don’t?

Sopan Deb is a writer for The New York Times, as well as a New York City-based stand up comedian. Before joining the Times, Deb was one of a handful of reporters who covered Donald Trump's presidential campaign from start to finish as a campaign embed for CBS News. He covered hundreds of rallies in more than 40 states for a year and a half and was named a “breakout media star” of the election by Politico.

At The New York Times, Deb has interviewed high profile subjects such as Denzel Washington, Stephen Colbert, the cast of Arrested Development, Kyrie Irving and Bill Murray. Deb’s work has previously appeared on NBC, Al Jazeera America and The Boston Globe, ranging from examining the trek of endangered manatees to following a class of blind filmmakers in Boston led by the former executive producer of Friends. He won an Edward R. Murrow award for a documentary he produced for the Boston Globe called “Larger Than Life,” which told the story about the NBA Hall of Famer Bill Russell’s complicated relationship with the city of Boston.

He lives in New York City.

“Sopan Deb hilariously and truthfully lets us in on the ups, downs, lefts, and rights of trying to understand - as a standup comedian and a journalist - the two grown-up strangers who raised him. It’s a crazy story, but you know. Good crazy. Funny crazy. Read-this-book crazy.”
— Pete Holmes, comedian, podcast host, and author of Comedy Sex God

“Both moving and hilarious, Missed Translations is not just about exploring culture, family, and love, but about understanding where one comes from in the deepest possible way. It’s a wonderful journey.”
— Jake Tapper, CNN host and author of The Hellfire Club

“I was moved by the ways in which Sopan Deb taps into both the darkness and light that permeate a story about love, family, and understanding. He’s a masterful storyteller, and I’m thankful for his bravery and willingness to share the kind of human story that we too often prefer to keep to ourselves.”
— Kal Penn, comedian and actor

“As a man who has both been a performer and covered performance, Sopan Deb now paints his most important picture yet, the self-portrait.”
— Roy Wood Jr., comedian and correspondent on The Daily Show with Trevor Noah

"A sympathetic portrait of South Asians who are neither crazy and rich nor humorless nerds...Memoirs by children of immigrants often fault clueless parents; this one is refreshing for Deb’s realization that—whatever his elders’ missteps—he needed “to take some responsibility for my part in our family’s disconnect” for things to change."
— Kirkus Reviews

"While his topic is serious, Deb’s writing is breezy and witty, and his earnestness will sweep readers up into this charmer of a memoir."
— Booklist

"A delightful memoir of people and place that will draw in Deb’s fans and attract plenty of new ones."