The Sharp Edge of Silence (Hardcover) 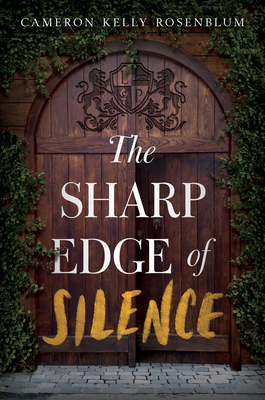 Tradition meets People Like Us in this timely and haunting YA contemporary standalone that tackles the contagious nature of toxic masculinity at an elite New England boarding school clinging to its past, and the sexual assault that changes everything.

WHO WILL YOU BE AT LYCROFT PHELPS?

This is the question all Lycroft applicants want to be asked. It means they’ve been accepted to one of the most prestigious private high schools in the nation.

Over 150 years is plenty of time for traditions to bake into the campus’s bricks and ivy. Ceremonies. Athletic rivalries. Secret societies. Pranks taken too far. But navigating it all will make Charlotte (perfect, straight-A student), Max (scholarship kid and STEM whiz), and Quinn (artist, dreamer, Lycroft legacy) question all they thought they knew about themselves…and the school.

Especially when Quinn’s sexual assault becomes public and implicates one of the top-tier athletes on campus.

Told in alternating perspectives, this gripping, fast-paced narrative is perfect for readers looking for their next empowering #MeToo read.

Cameron Kelly Rosenblum grew up in Connecticut. She studied English literature at Kenyon College and earned a master’s in education at Lesley University. Her time as a teacher and children’s librarian inspired her to write for young people. The Stepping Off Place is her debut novel. The Sharp Edge of Silence is her second. Cameron lives near Portland, Maine, with her husband, son, daughter, two dogs, and a cat. Visit her online at www.cameronrosenblum.com or on Twitter @ckellyrose.

"The Sharp Edge of Silence is a searingly honest story of sexual assault and one girl’s journey to fight for herself in the aftermath. But it’s also about friendship and finding one’s voice. Quinn is heroic and human and she had my heart from the very first page. Please read this beautiful book." — Jennifer Niven, #1 New York Times bestselling author of All the Bright Places

“The Sharp Edge of Silence is a thrilling story of the courage necessary to effect change at a vividly drawn boarding school. Cameron Kelly Rosenblum writes with a crackling, lyrical voice that takes root in your heart and echoes in your mind long after you’re done turning pages.” — Jeff Zentner, critically acclaimed and award-winning author of The Serpent King and In the Wild Light

“Told in sumptuous, evocative prose, The Sharp Edge of Silence chronicles the interwoven stories of three very different Lycroft Phelps students on their journey to a shared epiphany: that power and privilege hide a multitude of sins, and silence is the natural enemy of justice. The poetic narrative and sparkling New England setting illustrate that beauty can be found in broken things, and anything is survivable if we don’t give up on ourselves.” — Gillian French, Edgar Award Finalist and author of Grit, The Lies They Tell, and Missing Season

“Unnerving, harrowing and suspenseful, The Sharp Edge of Silence is a masterfully woven story that explodes with raw anger at the repercussions of toxic masculinity on an elite boarding school campus. A sensitive, hopeful look at fitting in and taking a stand.”    — Alex Richards, author of Accidental and When We Were Strangers