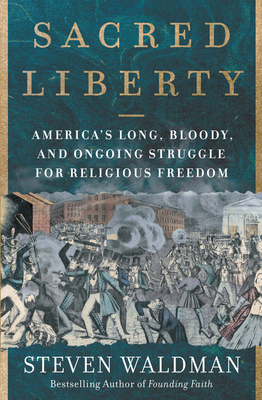 Just as the documentary Eyes on the Prize captured the rich drama of the civil rights movement, Sacred Liberty brings to life the remarkable story of how America became one of the few nations in world history that has religious freedom, diversity and high levels of piety at the same time. Finally, Sacred Liberty provides a roadmap for how, in the face of modern threats to religious freedom, this great achievement can be preserved.

STEVEN WALDMAN is the national bestselling author of Founding Faith and co-founder of Report for America, a national service program that places talented journalists into local newsrooms. He was National Editor of US News & World Report, National Correspondent for Newsweek, and co-founder of Beliefnet.  His writings have also appeared in The Wall Street Journal, The New York Times, Washington Post, National Review, Christianity Today, The Atlantic, First Things, The Washington Monthly, Slate, The New Republic and others. He lives in Brooklyn with his wife, Amy Cunningham.

“Religious freedom, enshrined in the First Amendment, is central to America’s identity. Waldman shows how remarkable that is, and how tenuous.”
— New York Times

“Without freedom of conscience the whole history of the nation--and world--might be very different. We are lucky that Waldman has written this compelling study of the most essential breakthrough of modernity: the right to believe, or not, as one wishes. A great book about a monumental issue.”
— Jon Meacham, Pulitzer-Prize-winning author of The Soul of America

“A powerful account of American religion since the colonial period...This insightful study is grounds for guarded optimism. It shows that the advance of decency has been steady, heartening—and fragile.”
— The Economist

“This is an important and fascinating book full of riveting stories, provocative insights, inspiring heroes, and some serious warnings. The American model of religious freedom should be the envy of the world.  But if we don’t understand how we made this great ‘invention,’ we could easily squander the achievement.”
— Reza Aslan, author of Zealot and God: A Human History