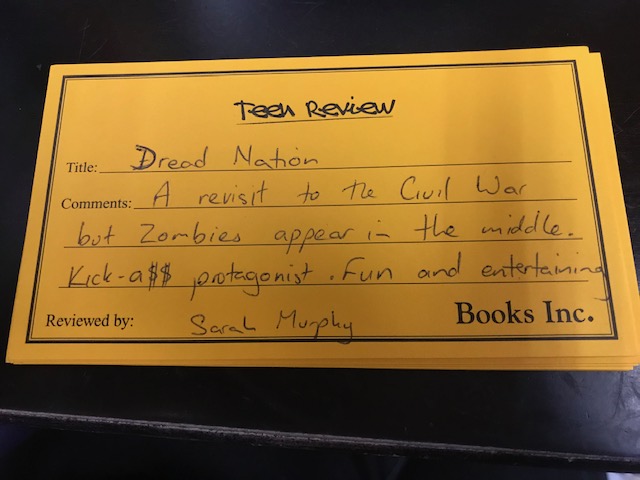 At once provocative, terrifying, and darkly subversive, Dread Nation is Justina Ireland's stunning vision of an America both foreign and familiar—a country on the brink, at the explosive crossroads where race, humanity, and survival meet.

Jane McKeene was born two days before the dead began to walk the battlefields of Gettysburg, Pennsylvania—derailing the War Between the States and changing the nation forever.

In this new America, safety for all depends on the work of a few, and laws like the Native and Negro Education Act require certain children attend combat schools to learn to put down the dead.

But there are also opportunities—and Jane is studying to become an Attendant, trained in both weaponry and etiquette to protect the well-to-do. It's a chance for a better life for Negro girls like Jane. After all, not even being the daughter of a wealthy white Southern woman could save her from society’s expectations.

But that’s not a life Jane wants. Almost finished with her education at Miss Preston's School of Combat in Baltimore, Jane is set on returning to her Kentucky home and doesn’t pay much mind to the politics of the eastern cities, with their talk of returning America to the glory of its days before the dead rose.

But when families around Baltimore County begin to go missing, Jane is caught in the middle of a conspiracy, one that finds her in a desperate fight for her life against some powerful enemies.

And the restless dead, it would seem, are the least of her problems.

Please note that this book has deckle edges (the edges of the paper are purposely rough).

Justina Ireland is the author of Dread Nation, Deathless Divide, Vengeance Bound, Promise of Shadows, and the Star Wars novel Lando’s Luck. She enjoys dark chocolate and dark humor and is not too proud to admit that she’s still afraid of the dark. She lives with her husband, kid, and dog in Pennsylvania. You can visit her online at www.justinaireland.com.

“This highly anticipated release is getting lauded as equal parts exciting, terrifying, and oh-so-relevant. Crackles on every page.”
— Brightly

“Ireland delivers a necessary, subversive, and explosive novel with her fantasy-laced alternate history that does the all-important work of exploring topics of oppression, racism, and slavery while simultaneously accomplishing so much more. Brilliant and gut-wrenching.”
— Booklist (starred review)

“Abundant action, thoughtful worldbuilding, and a brave, smart, and skillfully drawn cast entertain as Ireland (Promise of Shadows) illustrates the ignorance and immorality of racial discrimination and examines the relationship between equality and freedom. Mounting peril creates a pulse-pounding pace, hurtling readers toward a nail-biting conclusion.”
— Publishers Weekly (starred review)

“Will catch readers off-guard with its blend of genres: it starts out as an historical thriller but then tosses in hard hits of mystery, dystopian reimagining, romance, and humor. Jane’s voice reads familiar to more contemporary considerations of Black girlhood, with elements such as beauty standards, colorism, and friendships.”
— Bulletin of the Center for Children’s Books (starred review)

“This absorbing page-turner works on multiple levels: as unflinching alternate history set in post-Reconstruction-era Maryland and Kansas; as a refreshingly subversive action story starring a badass heroine; as zombie fiction suspenseful; and as a compelling exhortation to scrutinize the racist underpinnings of contemporary American sociopolitical systems.”
— Horn Book (starred review)

“Ireland skillfully works in the different forms of enslavement, mental and physical, into a complex and engaging story. A perfect blend of horrors real and imagined, perfect for fans of The Walking Dead.”
— School Library Journal (starred review)

“This is the zombie novel I’ve been waiting for my whole life.”
— Kate Elliott, New York Times bestselling author of Court of Fives