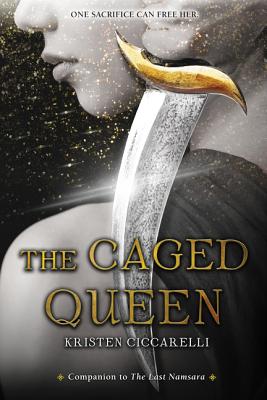 This is book number 2 in the Iskari series.

Kristen Ciccarelli’s distinct brand of lyrical, haunting fantasy continues in the companion to her bestselling debut, The Last Namsara. Perfect for fans of Kristin Cashore and Renee Ahdieh.

Once there were two sisters born with a bond so strong that it forged them together forever. Roa and Essie called it the hum. It was a magic they cherished—until the day a terrible accident took Essie’s life and trapped her soul in this world.

Dax—the heir to Firgaard’s throne—was responsible for the accident. Roa swore to hate him forever. But eight years later he returned, begging for her help. He was determined to dethrone his cruel father, under whose oppressive reign Roa’s people had suffered.

Roa made him a deal: she’d give him the army he needed if he made her queen. Only as queen could she save her people from Firgaard’s rule.

Then a chance arises to right every wrong—an opportunity for Roa to rid herself of this enemy king and rescue her beloved sister. During the Relinquishing, when the spirits of the dead are said to return, Roa discovers she can reclaim her sister for good.

All she has to do is kill the king.

Kristen Ciccarelli is the internationally bestselling author of The Last Namsara and The Caged Queen. Before writing books for a living, she worked as an artisanal baker, an indie bookseller, and a ceramic artist. These days she resides in a blustery seaside cove on Newfoundland’s Great Northern Peninsula with her blacksmith and her rescue dog. She likes her coffee dark, her weather broody, and her house warmed by a wood fire. Learn more at www.kristenciccarelli.com.

“This engaging tale of love and adventure... is a fantasy reminiscent of Emma Orczy’s The Scarlet Pimpernel.”
— Booklist

PRAISE FOR THE LAST NAMSARA: “Ciccarelli layers multiple story threads… seamlessly weaving them back as the plot moves along. The third-person narration allows full immersion in the world… The larger political implications of war, rebellion, and the years of rebuilding that must follow are all thoughtfully examined.”
— Bulletin of the Center for Children’s Books (starred review)

“This coming-of-age narrative shows the struggles of learning to trust one’s own mind and heart. Fantasy YA readers will love this story of a girl and her dragons. They will be dying to know what happens on their next adventure.”
— School Library Journal