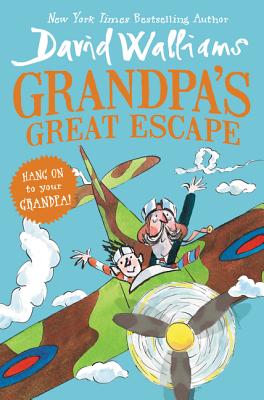 David Walliams, hailed as “the heir to Roald Dahl” by The Spectator, burst onto the American scene with the New York Times bestseller Demon Dentist. Now the UK’s #1 bestselling children’s author is back with this high-flying adventure about a boy and his grandfather, perfect for fans of Jeff Kinney and Rachel Renee Russell.

Grandpa is Jack’s favorite person in the world. It doesn’t matter that he wears his slippers to the supermarket, serves Spam a la Custard for dinner, and often doesn’t remember Jack’s name. But then Grandpa starts to believe he’s back in World War II, when he was a Spitfire fighter pilot, and he’s sent to live in an old folk’s home run by the sinister Matron Swine. Now it’s up to Jack to help Grandpa plot a daring escape!

David Walliams is the New York Times bestselling author of Demon Dentist, The Midnight Gang, and Grandpa's Great Escape. His novels have sold over eighteen million copies worldwide and have been translated into over fifty-three languages. David’s books have achieved unprecedented critical acclaim—with many reviewers comparing him to his all-time hero, Roald Dahl. In addition to being a bestselling author, David is an actor, comedian, and television personality. In 2017, he was awarded an OBE for services to charity and the arts. He lives in the UK.

PRAISE IN THE USA FOR GRANDPA’S GREAT ESCAPE:
”A realistic and touching relationship. Ample illustrations from the always splendid Ross will keep the pages in this plump volume turning. A Dahl-esque tale.”
— Kirkus Reviews

“While the irreverent wit will keep readers engaged, the surprising tenderness in the relationship between Jack and his ailing grandfather is what makes this book truly shine. A darkly humorous tale with a surprising amount of heart.”
— School Library Journal

“The comedy is nicely counterbalanced by the poignant bond between Jack and Grandpa. Ross’s energetic drawings and some playful use of typography bring additional drama and humor to the story.”
— Publishers Weekly

“A pleaser for fans of similar escapades engineered by the likes of Roald Dahl or Frank Cotrell-Boyce. Walliams, already popular in the UK, is a best-seller this side of the pond as well, and this caper promises to be no different.”
— ALA Booklist

“The ultimate emphasis on loving people where you find them, as Jack does when he accepts his role as squadron leader rather than grandson, is poignant and well conveyed, even amid the cheeky humor.”
— Bulletin of the Center for Children’s Books

PRAISE IN THE USA FOR DEMON DENTIST:
“A Brit-flavored romp that combines moments of intense terror and bracing courage with biting satire.”
— Kirkus Reviews

“A Dahl-esque mix of humor and horror that will appeal to fans of both.”
— Bulletin of the Center for Children’s Books

“A goofy, gory, outlandish tale of deep evil and terrible tooth-rot—and sweetness of heart. Kids who enjoy humorous gross-out horror will definitely want to book an appointment of their own with the Demon Dentist.”
— Wall Street Journal

“Dahl-esque in the extreme…Frenetic humor for middle grade fans of the funny and fearsome.”
— School Library Journal

UK PRAISE FOR DAVID WALLIAMS: “No one has any business being as talented as David Walliams. He is the heir to Roald Dahl—and that’s saying a lot.”
— The Spectator

“Unlike other celebrity authors, Walliams can write; his energetic fairytale will be relished.”
— The Times

“The joy of David’s books are that he completely understands how children think and feel and is never ever patronising.”
— The Sun

“Further proof that Walliams has become a master storyteller. Walliams manages to infuse his novels with genuine wit and sly commentary.”
— Heat Magazine

“Comedian David Walliams has taken the publishing world by storm.”
— The Metro

“A triumphant mix of wit and warmth.”
— Telegraph

“A great comic tale—Walliams is a natural wit.”
— Evening Standard