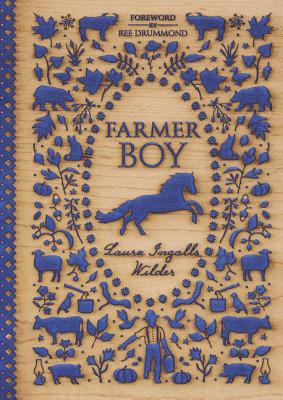 Revisit one of the most beloved books in Laura Ingalls Wilder’s classic Little House series with this gorgeous hardcover, unjacketed edition of Farmer Boy, featuring a special foreword from Ree Drummond, all-new iconic cover art, and no interior art.

While Laura Ingalls grows up in a little house on the western prairie, Almanzo Wilder is living on a big farm in New York State. Almanzo and his brother and sisters help with the summer planting and fall harvest. In winter there is wood to be chopped and great slabs of ice to be cut from the river and stored. Almanzo wishes for just one thing—his very own horse—but he must prove that he is ready for such a big responsibility.

Based on the childhood of Laura’s husband, Almanzo Wilder, Farmer Boy is the second book in the award-winning Little House series, which has captivated generations of readers with its depiction of life on the American frontier.