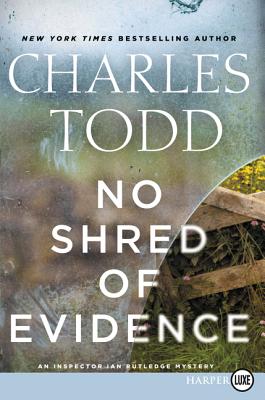 By Charles Todd
$25.99
Unavailable, Out of Stock, or Out of Print

This is book number 18 in the Inspector Ian Rutledge Mysteries series.

In this absorbing new entry in the acclaimed New York Times bestselling series, Scotland Yard’s Ian Rutledge is caught up in a twisted web of vengeance and murder.

On the north coast of Cornwall, an apparent act of mercy is repaid by an arrest for murder. Four young women have been accused of the crime. A shocked father calls in a favor at the Home Office. Scotland Yard is asked to review the case.

However, Inspector Ian Rutledge is not the first Inspector to reach the village. Following in the shoes of a dead man, he is told the case is all but closed. Even as it takes an unexpected personal turn, Rutledge will require all his skill to deal with the incensed families of the accused, the grieving parents of the victim, and local police eager to see these four women sent to the infamous Bodmin Gaol. Then why hasn’t the killing stopped?

With no shred of evidence to clear the accused, Rutledge must plunge deep into the darkest secrets of a wild, beautiful and dangerous place if he is to find a killer who may—or may not—hold the key to their fate.

“It’s that melancholy tone, the legacy of the trenches, that gives Todd’s polite rural mystery such uncommon depth.” — Marilyn Stasio, New York Times Book Review on NO SHRED OF EVIDENCE

“Fans already mourning the end of “Downton Abbey” can easily get their English fix by following Rutledge and Hamish on their rounds.” — Wilmington Star News on NO SHRED OF EVIDENCE

“Poirot was one name, Holmes was another, and Rutledge deserves to be in that classic pack of crime solvers.” — Suspense Magazine on NO SHRED OF EVIDENCE

“NO SHRED OF EVIDENCE is the latest in Charles Todd’s consistently rewarding historical mysteries about British Detective Inspector Ian Rutledge. Over the course of a dozen and a half books, Todd has brilliantly, gradually revealed the many sides of this complex, melancholy man.” — Seattle Times Book Review

“The mother and son team, who write as Charles Todd, deftly capture the atmosphere of post World War I England in this complex mystery which will appeal to fans of British mysteries.” — Iron Mountain Daily News on NO SHRED OF EVIDENCE