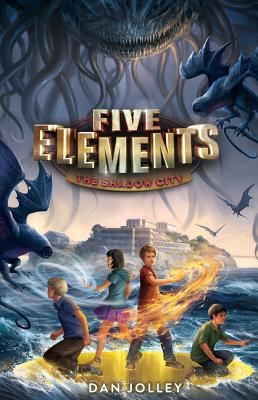 This is book number 2 in the Five Elements series.

The second book in an epic middle grade series with awesome elemental powers, nightmarish creatures, and nonstop adventure that will thrill kids who love Avatar: The Last Airbender, Rick Riordan, and Brandon Mull.

Five elements. Two worlds. One city…and one chance to save it.

In the past two weeks, Gabe Conway has fought a six-winged dragon, bound himself to the element of fire, and rescued one of his best friends from the twisted parallel dimension known as Arcadia. Now he has to find a way to do something even more impossible: destroy Arcadia forever—before a sinister cult unleashes its nightmare of death and destruction across San Francisco.

“Thrilling entertainment. Amid the seriousness of the children’s quest is a continuous stream of lighthearted, appropriate humor that is sure to bring a smile to any reader’s face. This fast-paced fantasy adventure should please readers of Cassandra Clare and Holly Black’s Magisterium series.”
— School Library Journal

“A scary adventure mixed with shadows and suspense, along with an ending reminiscent of Stranger Things.”
— Kirkus Reviews