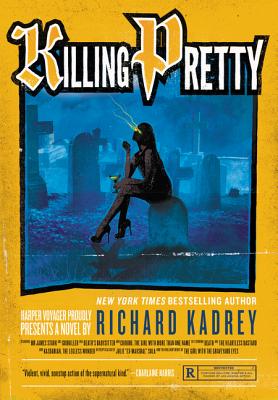 This is book number 7 in the Sandman Slim series.

James Stark has met his share of demons and angels, on earth and beyond. Now, he’s come face to face with the one entity few care to meet: Death.

Someone has tried to kill Death—ripping the heart right out of him—or rather the body he’s inhabiting. Death needs Sandman Slim’s help: he believes anyone who can beat Lucifer and the old gods at their own game is the only one who can solve his murder.

Stark follows a sordid trail deep into LA’s subterranean world, from vampire-infested nightclubs to talent agencies specializing in mad ghosts, from Weimar Republic mystical societies to sleazy supernatural underground fight and sex clubs. Along the way he meets a mysterious girl—distinguished by a pair of graveyard eyes—as badass as Slim: she happens to be the only person who ever outwitted Death. But escaping her demise has had dire consequences for the rest of the world . . . and a few others.

For years, Slim has been fighting cosmic forces bent on destroying Heaven, Hell, and Earth. This time, the battle is right here on the gritty streets of the City of Angels, where a very clever, very ballsy killer lies in wait.

Richard Kadrey is the New York Times bestselling author of the Sandman Slim supernatural noir books. Sandman Slim was included in Amazon’s “100 Science Fiction & Fantasy Books to Read in a Lifetime,” and is in development as a feature film. Some of his other books include The Wrong Dead Guy, The Everything Box, Metrophage, and Butcher Bird. He also writes the Vertigo comic Lucifer.

“Kadrey’s done amazing work keeping one of literature’s great anti-heroes in adventures this long, and Killing Pretty proves that he isn’t slowing down.”
— Cory Doctorow on KILLING PRETTY

“If your tastes trend to noir grit and L.A. cool, Slim is your man.”
— Barnes & Noble Sci-Fi & Fantasy Blog on KILLING PRETTY

“Six years after stumbling into Sandman Slim’s seedy, seamy world, I’m still hungry to go back every time. To get lost in it. I have yet to be disappointed. But if this is escapism, it’s the most masochistic kind I can imagine.”
— NPR Books on KILLING PRETTY