The Ends of the World: Volcanic Apocalypses, Lethal Oceans, and Our Quest to Understand Earth's Past Mass Extinctions (Hardcover) 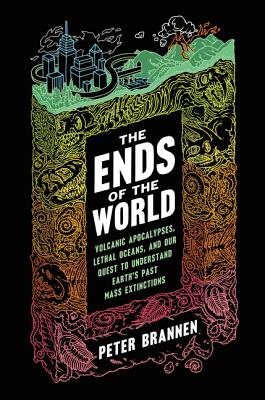 By Peter Brannen
$27.99
Unavailable, Out of Stock, or Out of Print

One of Vox’s Most Important Books of the Decade

As new groundbreaking research suggests that climate change played a major role in the most extreme catastrophes in the planet's history, award-winning science journalist Peter Brannen takes us on a wild ride through the planet's five mass extinctions and, in the process, offers us a glimpse of our increasingly dangerous future

Our world has ended five times: it has been broiled, frozen, poison-gassed, smothered, and pelted by asteroids. In The Ends of the World, Peter Brannen dives into deep time, exploring Earth’s past dead ends, and in the process, offers us a glimpse of our possible future.

Many scientists now believe that the climate shifts of the twenty-first century have analogs in these five extinctions. Using the visible clues these devastations have left behind in the fossil record, The Ends of the World takes us inside “scenes of the crime,” from South Africa to the New York Palisades, to tell the story of each extinction. Brannen examines the fossil record—which is rife with creatures like dragonflies the size of sea gulls and guillotine-mouthed fish—and introduces us to the researchers on the front lines who, using the forensic tools of modern science, are piecing together what really happened at the crime scenes of the Earth’s biggest whodunits.

Part road trip, part history, and part cautionary tale, The Ends of the World takes us on a tour of the ways that our planet has clawed itself back from the grave, and casts our future in a completely new light.

Peter Brannen is an award-winning science journalist whose work has appeared in the New York Times, The Atlantic, Wired, Washington Post, Slate, Boston Globe, Aeon, and others. A graduate of Boston College, he was a 2015 journalist-in-residence at the Duke University National Evolutionary Synthesis Center and a 2011 Woods Hole Oceanographic Institution Ocean Science Journalism Fellow. This is his first book.

“[Brannen] is a companionable guide, as good at breathing life into the fossilized prose of scientific papers as he is at conjuring the Ordovician reign of the nautiloids.” — New York Times Book Review

“Clear-eyed, urgent, and eloquent. . . . Brannen offers an important education, making an argument for how better understanding what’s happened can help us determine how to move forward.” — Boston Globe

“Timely to say the least . . . with grace and wit, [Brannen] makes a compelling case that recognizing our fortune and coming to terms with our fragility means consciousness prevails in the universe. We are still capable of changing the way we live.” — Paste Magazine

“A remarkable journey into the deep past that has much to teach us about the future of our planet.” — The Guardian

“Masterful . . . might be just the book to give to that uncle of yours who still wants to argue about climate change (or even to your US Representative). But first, read it yourself. It’s a page turner.” — Ars Technica

“If readers have time for only one book on the subject, this wonderfully written, well-balanced, and intricately researched (though not too dense) selection is the one to choose.” — Library Journal (Starred Review)

“Revealing . . . Effectively link[s] past and present, [while] wind[ing] down with projections for the future and a warning against inaction in the face of climate change.” — Publishers Weekly

“A simultaneously enlightening and cautionary tale of the deep history of our planet and the possible future. . . . . entertaining and informative on the geological record and the researchers who study it. . . . a useful addition to the popular literature on climate change.” — Kirkus

“Much-needed as a cautionary lesson and a hopeful demonstration of how life on Earth keeps rebounding from destruction.” — Booklist

“A book about one apocalypse—much less five—could have been a daunting read, were it not for the wit, lyricism, and clarity that Peter Brannen brings to every page. He is a storyteller at the height of his powers, and he has found a story worth telling.” — Ed Yong, author of I Contain Multitudes

“Want to know the future? Look to the past, the deep past. That’s one of the many insights you’ll glean from reading Brannen’s entertaining, engaging, elegant book.” — David Biello, author of The Unnatural World

“A vivid, fascinating story about all the past and future lives of our planet. Peter Brannen has the knack of opening up new worlds under our feet.” — Michael Pye, author of The Edge of the World

“Robert Frost only gave us two options to end the world: fire or ice. Peter Brannen informs us in this fun rollick through deep history that there are so many more interesting ways to go.” — Paul Greenberg, author of Four Fish

“An exciting detective story venturing into the extraordinary worlds of our Earth’s past to discover what caused them to end. Brannen describes unimaginable floods, planet-scale catastrophes and incredible creatures that were once common. A cautionary tale for the future of our human age.” — Gaia Vince, author of Adventures in Anthropocene

“The Ends of the World recounts the breath-taking stories of the five mass extinctions that have punctuated the course of evolution. Its vertiginous sense of the fragility of living things will never leave you, not least because humanity may now be writing the end of Brannen’s riveting tale.” — Stephen Curry, professor of structural biology, Imperial College