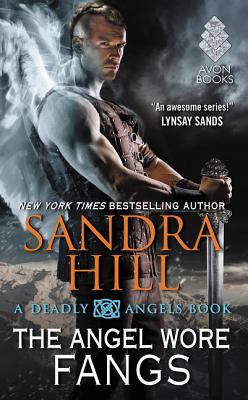 By Sandra Hill
$7.99
Unavailable, Out of Stock, or Out of Print

Once guilty of the deadly sin of gluttony, thousand-year-old Viking vampire angel Cnut Sigurdsson is now a lean, mean, vampire-devil fighting machine. His new side-job? No biggie: just ridding the world of a threat called ISIS while keeping the evil Lucipires (demon vampires) at bay. So when chef Andrea Stewart hires him to rescue her sister from a cult recruiting terrorists at a Montana dude ranch, vangel turns cowboy. Yeehaw!

The too-tempting mortal insists on accompanying him, surprising Cnut with her bravery at every turn. But with terrorists stalking the ranch in demonoid form, Cnut tele-transports Andrea and himself out of danger-accidentally into the 10th Century Norselands.

Suddenly, they have to find their way back to the future to save her family and the world . . . and to satisfy their insatiable attraction.

Sandra Hill is a graduate of Penn State and worked for more than ten years as a features writer and education editor for publications in New Jersey and Pennsylvania. Writing about serious issues taught her the merits of seeking the lighter side of even the darkest stories.