Undeniable: How Biology Confirms Our Intuition That Life Is Designed (Paperback) 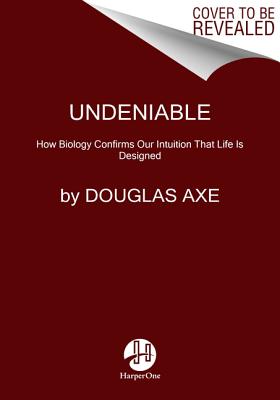 By Douglas Axe
$16.99
Unavailable, Out of Stock, or Out of Print

Named A Best Book of the Year by World Magazine

Throughout his distinguished and unconventional career, engineer-turned-molecular-biologist Douglas Axe has been asking the questions that much of the scientific community would rather silence. Now, he presents his conclusions in this brave and pioneering book. Axe argues that the key to understanding our origin is the “design intuition”—the innate belief held by all humans that tasks we would need knowledge to accomplish can only be accomplished by someone who has that knowledge. For the ingenious task of inventing life, this knower can only be God.

Starting with the hallowed halls of academic science, Axe dismantles the widespread belief that Darwin’s theory of evolution is indisputably true, showing instead that a gaping hole has been at its center from the beginning. He then explains in plain English the science that proves our design intuition scientifically valid. Lastly, he uses everyday experience to empower ordinary people to defend their design intuition, giving them the confidence and courage to explain why it has to be true and the vision to imagine what biology will become when people stand up for this truth.

Armed with that confidence, readers will affirm what once seemed obvious to all of us—that living creatures, from single-celled cyanobacteria to orca whales and human beings, are brilliantly conceived, utterly beyond the reach of accident.

Our intuition was right all along.

Douglas Axe, PhD, is the director of Biologic Institute, a non-profit research organization launched by Discovery Institute in Seattle. After his undergraduate studies at UC Berkeley and doctoral work at Caltech, he held postdoctoral and research scientist positions at the University of Cambridge, the Cambridge Medical Research Council Centre, and the Babraham Institute in Cambridge. His work and ideas have been featured in many scientific journals, including the Journal of Molecular Biology, the Proceedings of the National Academy of Sciences, and Nature, and in such books as Signature in the Cell and Darwin’s Doubt by Stephen Meyer and Life’s Solution by Simon Conway Morris.

“From childhood everyone directly grasps that life is designed - until they’re talked out of it by a culture saturated with materialism. Using the latest science, molecular biologist Douglas Axe shows why you don’t have to be an expert to trust your firm knowledge of the wonderful design of life.” — Michael J. Behe, author of Darwin's Black Box

“Undeniable is an important addition to the debate on the origins of life. It provides a middle way between religious and scientific explanations of how life began. A must-read for everyone who is interested in the origins of our universe.” — The Washington Book Review

“Great scientists are as much artists as scientists. Enchanted by the beauty of the world, they see through ideologies to facts. In this engaging book, Axe uses ‘common science’ to consider the biggest mystery: To what or to whom do we owe our existence? I greatly enjoyed it.” — Dean Koontz, New York Times bestselling author

“Douglas Axe’s Undeniable is bold, insightful and world-changing. It’s also a joy to read. I recommend it highly!” — Phillip E. Johnson, Professor Emeritus of Law at U. C. Berkeley and author of Darwin on Trial

“Highly rigorous yet passionate, lyrical, forthright, refreshingly brief and accessible, Undeniable is an urgently needed addition to the library of books on intelligent design.” — Evolution News

“In Undeniable we are privy to a first-hand account of the evidence for intelligence and the painful professional cost of swimming against the flow of accepted but un-proven truth. A must-read.” — Gerald Schroeder, author of The Science of God and God According to God

“Microbiologist Douglas Axe makes a case for intelligent design over and against the dominant secular materialism that pervades the scientific community. Whether one is an atheist, agnostic, or a theist, Undeniable adds another exciting voice to a lively debate.” — Reading Religion, A Publication of the American Academy of Religion

“Probably the most engaging book I have read in the past ten years, because of Dr. Axe’s clear explanations and profound insights. This is an important book, perhaps the best one in existence, for anyone who takes origins questions seriously, whatever their perspective.” — Chuck Garner, Professor of Organic Chemistry at Baylor University

“Axe has carefully crafted a case that strongly favors our human intuition that life was designed, demonstrating why unguided evolution is improbable in the extreme. This book’s power to convince surpasses that of everything I’ve read on origins science in my sixty-five years as an engineer, biophysicist, and physiologist.” — Mark C. Biedebach, Ph.D., Professor Emeritus, Dept. of Biological Sciences, California State University, Long Beach

“Undeniable makes a compelling case by a molecular biologist that living organisms were designed by an intelligent agent, i.e. God. A decisive blow at the foundations of the materialistic explanations of the origin and diversity of life’s forms that have dominated biology for 200 years.” — Donald Ewert, PhD, Director of Research at the Hough Ear Institute and Former Wistar Institute Research Scientist

“Douglas Axe is one of the very few experimental scientists who has used his skills to test the validity of evolutionary mechanisms as a source of inventions. Here, he concludes that we can trust our common [universal] design intuition; it is supported by science, whereas evolutionary stories are anti-science.” — Matti Leisola, D.Sc. Professor Emeritus of Bioprocess Engineering, Aalto University, Finland

“Many say we must accept that life is ultimately due to a grand cosmic accident, that evolution is an unguided purposeless process and that we must deny our experience. Axe describes why the design we see in nature fits with scientific observation as well as with our ‘undeniable’ experience.” — Russell W. Carlson, Professor Emeritus, Department of Biochemistry & Molecular Biology, University of Georgia

“Axe performs a remarkable act of intellectual jiu-jitsu, finding evidence of design in the uttermost molecular details of life, those that were supposed to banish antiquated notions of design. No matter what side of the design debate you happen to be on, it’s worth reading, engaging and debating.” — J Scott Turner, Professor of Biology, SUNY ESF, Syracuse, New York

“Undeniable is a marvelous book, both engaging and convincing-a true masterpiece.” — Marcos Eberlin, Professor of Chemistry at University of Campinas, member of the Brazilian Academy of Sciences

“’Religion vs. science’ conflicts are generally depicted in popular culture as battles between narrow-minded bigots and tolerant truth-seekers. In recent decades, though, this narrative has arguably been turned on its head. Douglas Axe knows this first-hand, and in Undeniable, presents his objections to the theory of evolution.” — The Jewish Press

Whether one is an atheist, agnostic, or a theist, Undeniable adds another exciting voice to a lively debate. — Reading Religion