And Then There Were None CD (CD-Audio) 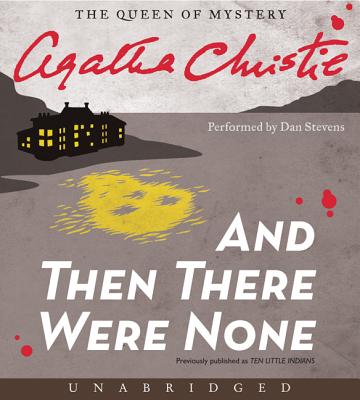 By Agatha Christie, Dan Stevens (Read by)
$29.99
Unavailable, Out of Stock, or Out of Print

One of the most famous and beloved mysteries from The Queen of Suspense—Agatha Christie—now a Lifetime TV movie.

"Ten . . ."
Ten strangers are lured to an isolated island mansion off the Devon coast by a mysterious "U. N. Owen."

"Nine . . ."
At dinner a recorded message accuses each of them in turn of having a guilty secret, and by the end of the night one of the guests is dead.

"Seven . . ."
Which among them is the killer and will any of them survive?

Agatha Christie is the most widely published author of all time, outsold only by the Bible and Shakespeare. Her books have sold more than a billion copies in English and another billion in a hundred foreign languages. She died in 1976, after a prolific career spanning six decades.

Dan Stevens is internationally known for his role as Matthew Crawley in the hit television drama Downton Abbey. Dan's other TV work includes Sense & Sensibility, Maxwell and The Line of Beauty, and his film credits include Vamps, Hilde, and three upcoming releases: A Walk Among the Tombstones, The Fifth Estate and Summer In February. Dan's theatre work includes The Heiress on Broadway, and Arcadia, Every Good Boy Deserves Favour, The Vortex and Hay Fever in London.