One Last Strike: Fifty Years in Baseball, Ten and a Half Games Back, and One Final Championship Season (Paperback) 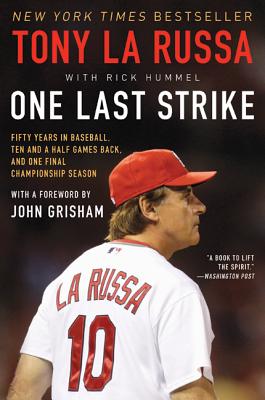 In this New York Times best-selling comeback story, legendary baseball manager Tony La Russa reveals the thrilling behind-the-scenes details of how he led the St. Louis Cardinals to the 2011 World Series victory, despite countless injuries, mishaps, and roadblocks along the way.

Tony La Russa, the winner of four Manager of the Year awards—who led his teams to six Pennant wins and three World Series crowns—chronicles one of the most exciting end-of-season runs in baseball history, revealing with fascinating behind-the-scenes details how, under his expert management, the St. Louis Cardinals emerged victorious in the 2011 World Series despite countless injuries, mishaps, and roadblocks along the way. Talking candidly about the remarkable season—and his All-Star players like Albert Pujols and David Freese—the recently retired La Russa celebrates his fifty years in baseball, his team’s amazing recovery from 10 ½ games back, and one final, unforgettable championship in a book that no true baseball fan will want to miss.

Tony La Russa managed the St. Louis Cardinals from 1996 to 2011, as well as the Oakland A's and the Chicago White Sox. He has three World Series wins, six league championships, and five Manager of the Year awards, and is ranked third in all-time major league wins. He and his wife, Elaine, founded the Tony La Russa Animal Rescue Foundation in Walnut Creek, California. They have two daughters, Bianca and Devon.

Rick Hummel has covered baseball for the St. Louis Post-Dispatch for forty years. A former president of the Baseball Writers Association of America, he has received numerous awards for his writing and has been honored by the National Baseball Hall of Fame and the Missouri Sports Hall of Fame.