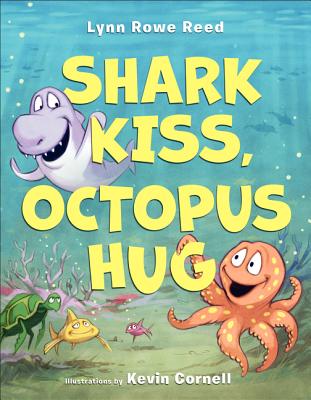 Shark Kiss, Octopus Hug is a sweet and funny picture book about friendship—under the sea!

Charlie the shark and Olivia Octopus were the best friends the ocean had ever seen. All Charlie wanted was a hug. Olivia desperately wished for a kiss. This is the story of how they both found what they were looking for.

Lynn Rowe Reed is the creator of numerous picture books. She is the author of Shark Kiss, Octopus Hug, illustrated by Kevin Cornell, and has illustrated other books, such as Punctuation Takes a Vacation by Robin Pulver and her own Pedro, His Perro, and the Alphabet Sombrero, which was selected for a Best in Children's Book Illustration show at the Museum of American Illustration. She has also illustrated for the Wall Street Journal and National Public Radio.

Kevin Cornell rests his head in Philadelphia, where he and his wife match wits daily with a terrifying dachshund. Other monsters Kevin has recently tamed include The Terrible Two series by Mac Barnett and Jory John, Count the Monkeys by Mac Barnett, and Lulus Mysterious Mission by Judith Viorst.

“Should have readers in hysterics.”
— Kirkus Reviews