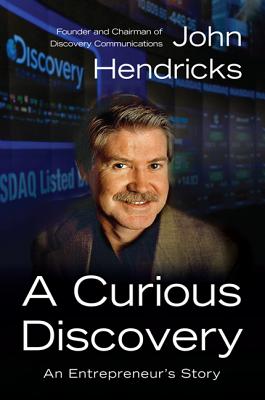 By John S. Hendricks
$28.99
Unavailable, Out of Stock, or Out of Print

In A Curious Discovery, media titan John Hendricks tells the remarkable story of building one of the most successful media empires in the world, Discovery Communications.

John Hendricks, a well-respected corporate leader and brand builder, reveals that his professional achievements would not have been possible without one crucial quality that has informed his life since childhood: curiosity.

This entrepreneur’s story takes you behind the scenes of some of the network’s most popular shows and greatest successes, and imparts crucial lessons from the network’s setbacks.

With insights, anecdotes, photographs, and real-world wisdom, A Curious Discovery is more than a powerful autobiography and corporate history: It also a valuable primer for business innovators and entrepreneurs.

John S. Hendricks is the founder of Discovery Communications, the world's number one nonfiction media company, and serves as chairman of the Board of Directors. Hendricks has been the driving force behind the company's dramatic growth, including the expansion of Discovery Communications from its core property, Discovery Channel, to current global operations in more than 215 countries with 150 networks, among them TLC, Animal Planet, and Science. He lives in Maryland.

“John Hendricks’ story is quintessentially American, and yet he ended up bringing to millions the diversity and excitement of the world. In A CURIOUS DISCOVERY he tells a terrific story rooted in the 20th Century but exploding into the 21st.” — Robert Redford

“A CURIOUS DISCOVERY is a fascinating look at our ever-evolving media landscape and a practical guide for purpose-driven, made-in-America prosperity.” — Bill Clinton