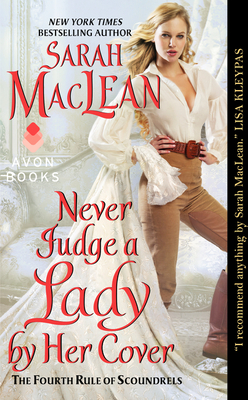 This is book number 4 in the Rules of Scoundrels series.

By day, she is Lady Georgiana, sister to a duke, ruined before her first season in the worst kind of scandal. But the truth is far more shocking—in London's darkest corners, she is Chase, the mysterious, unknown founder of the city's most legendary gaming hell. For years, her double identity has gone undiscovered . . . until now.

Brilliant, driven, handsome-as-sin Duncan West is intrigued by the beautiful, ruined woman who is somehow connected to a world of darkness and sin. He knows she is more than she seems, and he vows to uncover all of Georgiana's secrets, laying bare her past, threatening her present, and risking all she holds dear . . . including her heart.

A life-long romance reader, Sarah MacLean wrote her first romance novel on a dare, and never looked back. She is the New York Times and USA Today bestselling author of romances translated into more than twenty languages, a romance columnist, and the co-host of the weekly romance novel podcast, Fated Mates. A graduate of Smith College and Harvard University, she lives in New York City.

“MacLean wraps up her popular Rules of Scoundrels series with the clever plotting, exquisite writing and lush sensuality she is known for. A worthy conclusion to an extraordinary series.” — Kirkus Reviews (starred review)

“Series readers will be blown away by the revelation of Chase’s identity, and will cheer on Duncan and Georgiana as they bring their complex relationship to a riveting conclusion.” — Publishers Weekly (starred review)