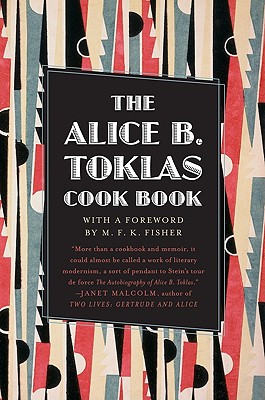 “A book of character, fine food and tasty human observation."  —The New Yorker

Long before Julia Child discovered French cooking, Alice B. Toklas was sampling local dishes, collecting recipes, and cooking for the writers, artists, and expats who lived in Paris between the wars. Hemingway, Fitzgerald, Wilder, Matisse, and Picasso shared meals at the home she kept with Gertrude Stein, who famously memorialized her in The Autobiography of Alice B. Toklas.

The Alice B. Toklas Cook Book, however, is her true memoir: a collection of traditional French recipes that predates Child's Mastering the Art of French Cooking. Toklas supplies familiar recipes such as coq au vin, bouillabaisse, and boeuf bourguignon, along with what is perhaps the earliest instructions for haschich fudge (“which anyone could whip up on a rainy day"), and she entertains with fascinating memories of Paris—Toklas' home for most of her life—and of rural France, Spain, and America.

Alice B. Toklas was Gertrude Stein's "secretary-companion." For many years they lived together in France, Toklas cooking while Stein was writing. She is memorialized in Stein's most famous book, The Autobiography of Alice B. Toklas.

“Alice was one of the really great cooks of all time.... The secret of her talent was great pains and a remarkable palate.”
— James Beard

“A book of character, fine food, and tasty human observation.”
— The New Yorker

“It will be the fiercest Francophobe who can read Alice’s recipes and not hanker for a taste, the dullest cook who will not want to get to the kitchen and try them out.”
— Time

“A cookbook that is delightful by way of its fine food has been made doubly pleasurable by the addition of shrewd worldly comment, by reminiscences, personalities, anecdotes, by the strong characters of the Misses Stein and Toklas.”
— New York Herald Tribune

“More than a cookbook and memoir, it could almost be called a work of literary modernism, a sort of pendant to Stein’s tour de force, The Autobiography of Alice B. Toklas.”
— Janet Malcolm, author of Two Lives: Gertrude and Alice