All the Right Stuff (Paperback) 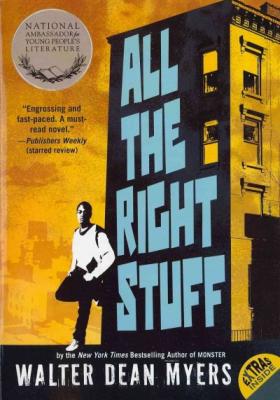 By Walter Dean Myers
$9.99
Unavailable, Out of Stock, or Out of Print

New York Times bestselling author Walter Dean Myers tackles the social contract from a teen’s perspective in his novel All the Right Stuff. In one of his most thought-provoking novels to date, Myers weaves together political philosophy, basketball, and making soup in Harlem, with the depth that defines his writing career.

After his father is shot and killed, Paul Dupree finds a summer job at a Harlem soup kitchen. Elijah, the soup man, questions Paul about tough life choices, even though Paul would rather be playing basketball. Over the summer, Paul begins to understand the importance of taking control of your life.

All the Right Stuff includes a Q&A between Walter Dean Myers and Ross Workman, coauthor of Kick.

Walter Dean Myers was the New York Times bestselling author of Monster, the winner of the first Michael L. Printz Award; a former National Ambassador for Young People's Literature; and an inaugural NYC Literary Honoree. Myers received every single major award in the field of children's literature. He was the author of two Newbery Honor Books and six Coretta Scott King Awardees. He was the recipient of the Margaret A. Edwards Award for lifetime achievement in writing for young adults, a three-time National Book Award Finalist, as well as the first-ever recipient of the Coretta Scott King-Virginia Hamilton Award for Lifetime Achievement.

“Myers has cooked up a provocative novel that simmers long after its last pages.” — Chicago Sun-Times

“[R]ewarding. A good fit for school libraries in which the social contract is taught or emphasized.” — School Library Journal

“[B]egins with a bang.” — Voice of Youth Advocates (VOYA)