The Butcher: Anatomy of a Mafia Psychopath (Paperback) 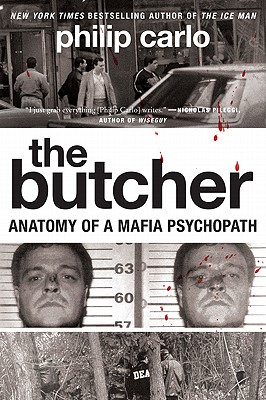 The New York Times bestselling author of Gaspipe and The Ice Man, Phillip Carlo returns with a hair-raising portrait of arguably the most depraved psychopath in the history of the Mafia, mob enforcer Tommy “Karate” Pitera. The Butcher tells the riveting true story of a hit man who loved his work too much—a maniac believed responsible for more than sixty remarkably brutal murders—whom even organized crime’s most cold-blooded assassins feared. Another riveting journey into the darkest corners of the underworld, Carlo’s The Butcher is destined to be a true crime classic alongside Wiseguys by Nicholas Pileggi and Underboss by Peter Maas.

Philip Carlo was born and raised on the mean streets of Bensonhurst, Brooklyn—the same streets Tommy Pitera hailed from. There, Carlo earned a Ph.D. in street smarts, and he escaped a life of crime by writing about it with unusual insight. He is the author of the bestsellers The Night Stalker, about notorious serial killer Richard Ramirez, and The Ice Man, about infamous Mafia contract killer Richard Kuklinski. Carlo lives with his wife, Laura, in New York City.