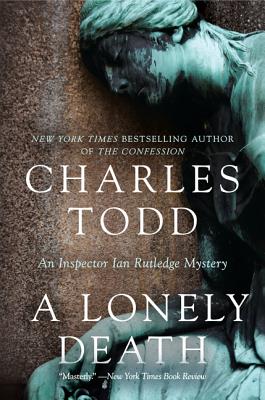 This is book number 13 in the Inspector Ian Rutledge Mysteries series.

“Charles Todd has penned another mystery masterpiece! Ian Rutledge is determined to find the killer who is garroting soldiers from Eastfield Company who survived the Great War. With the voice of Hamish, a dead soldier, constantly in his head, Inspector Rutledge wades through the red herrings and mistaken directions of the villagers. Along the way, we are reminded of the horrors and lasting effects of war while rooting for Ian to find love and happiness despite his fragile mental state.”
— Kathy Wales, Martha's Bookstore, Balboa Island, CA

“Todd’s Ian Rutledge mysteries are among the most intelligent and affecting being written these days.”
—Washington Post

“Todd once and for all establishes the shell-shocked Rutledge as the genre’s most complex and fascinating detective.” — Entertainment Weekly, on A LONELY DEATH (Grade: A-)

“[The authors’] subtle prose and profound empathy for all their characters enhance a suspenseful and twisty plot.” — Publishers Weekly on A Lonely Death

“Another engaging entry in a fine series.” — Booklist on A Lonely Death

“Todd’s intriguing revenge tale will keep the reader turning the pages, but the main draw remains Rutledge, the relentless inspector haunted by the voice of a Scotsman he executed on the battlefield for disobeying an order. Highly recommended for all aficionados of British postwar historical mysteries.” — Library Journal on A Lonely Death

“Eloquently blasts war for the obscenity it is.” — Kirkus Reviews on A Lonely Death

“Todd’s attention to period detail, plotting and character exploration are at the forefront of the 13th Ian Rutledge Mystery….Todd and his hero are in fine form from start to finish.” — Romantic Times on A Lonely Death (4 ½ stars; Top Pick)

“A strong entry in a strong series.” — Charlotte Observer on A Lonely Death

“Fully realized characters, well-researched settings, and exquisite writing combine with a surprising and chilling solution to mark this 13th outing as a standout in Todd’s deservedly award-winning series.” — Mystery Scene on A Lonely Death