Havana Nocturne: How the Mob Owned Cuba…and Then Lost It to the Revolution (Paperback) 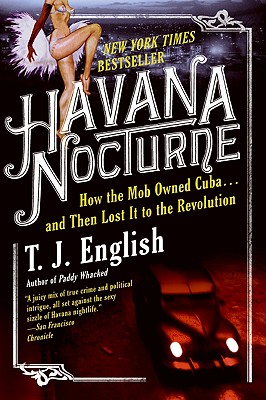 In modern-day Havana, the remnants of the glamorous past are everywhere—old hotel-casinos, vintage American cars & flickering neon signs speak of a bygone era that is widely familiar & often romanticized, but little understood. In Havana Nocturne, T.J. English offers a multifaceted true tale of organized crime, political corruption, roaring nightlife, revolution & international conflict that interweaves the dual stories of the Mob in Havana & the event that would overshadow it, the Cuban Revolution.

As the Cuban people labored under a violently repressive regime throughout the 50s, Mob leaders Meyer Lansky & Charles "Lucky" Luciano turned their eye to Havana. To them, Cuba was the ultimate dream, the greatest hope for the future of the US Mob in the post-Prohibition years of intensified government crackdowns. But when it came time to make their move, it was Lansky, the brilliant Jewish mobster, who reigned supreme. Having cultivated strong ties with the Cuban government & in particular the brutal dictator Fulgencio Batista, Lansky brought key mobsters to Havana to put his ambitious business plans in motion.

Before long, the Mob, with Batista's corrupt government in its pocket, owned the biggest luxury hotels & casinos in Havana, launching an unprecedented tourism boom complete with the most lavish entertainment, the world's biggest celebrities, the most beautiful women & gambling galore. But their dreams collided with those of Fidel Castro, Che Guevara & others who would lead the country's disenfranchised to overthrow their corrupt government & its foreign partners—an epic cultural battle that English captures in all its sexy, decadent, ugly glory.

Bringing together long-buried historical information with English's own research in Havana—including interviews with the era's key survivors—Havana Nocturne takes readers back to Cuba in the years when it was a veritable devil's playground for mob leaders. English deftly weaves together the parallel stories of the Havana Mob—featuring notorious criminals such as Santo Trafficante Jr & Albert Anastasia—& Castro's 26th of July Movement in a riveting, up-close look at how the Mob nearly attained its biggest dream in Havana—& how Fidel Castro trumped it all with the revolution.

T.J. English is a noted journalist, screenwriter, and author of the New York Times bestsellers Havana Nocturne, Paddy Whacked, The Savage City, and Where the Bodies Were Buried. He also authored The Westies, a national bestseller, Born to Kill, which was nominated for an Edgar Award, and The Corporation. His journalism has appeared in Esquire, Playboy, and New York magazine, among other publications. His screenwriting credits include episodes for the television dramas NYPD Blue and Homicide, for which he was awarded the Humanitas Prize. He lives in New York City.

“While Havana Nocturne makes you glad that Batista and his gangster pals ultimately got what they deserved, it also makes you regret never having gotten the chance to soak up a few mojitos while catching the floor show at the old Tropicana.” — Village Voice

“A tight storyteller, English provides a juicy mix of true crime and political intrigue, all set against the sexy sizzle of Havana nightlife.” — San Francisco Chronicle

“[An] excellent new book.… [English] provides a detailed account of the personalities and elements that made up Cuban life. His well-researched descriptions of how business, gambling, politics, revolution, music and religion all played off each other give Havana Nocturne a broad context and a knowledgeable edge.” — Washington Post

“Engaging….English’s brand of narrative is history, and he aims to set the record straight.” — Miami Herald

“It’s a roaring story, equal parts fact and myth, and for the first time, it gets told in its violent entirety by no less a crime scribe than T.J. English…compellingly telling.” — Miami Sun Post

“Spellbinding prose…Havana Nocturne is a powerful reminder of how the mob nearly achieved its biggest payday and how Castro beat the house, forever changing the course of history.” — San Antonio Express-News

“Crime writer English (Paddy Whacked) unfolds a story whose main outline will be familiar to any fan of The Godfather: Part II, but whose twists and turns no screenplay could keep up with.” — Kirkus Reviews

“Finally, the definitive book has been written on the Mob’s heyday in Cuba. Havana Nocturne is at once compelling and incisive—an entertaining page-tuner that will both shock and inform.” — Sam Giancana, author of Double Cross

“Sex and drugs and rockin’ mambo! Havana Nocturne is a dazzling parade through the Mob’s interests in Cuba. A must for Mob fans everywhere.” — Legs McNeil, author of The Other Hollywood and Please Kill Me

“All the razzle-dazzle is here—Sinatra, the black sedans, the showgirls—but English goes further, to show how gangsterismo permeated the politics of Cuba and influenced its destiny.” — The Scotsman