The Great Migration: Journey to the North (Hardcover) 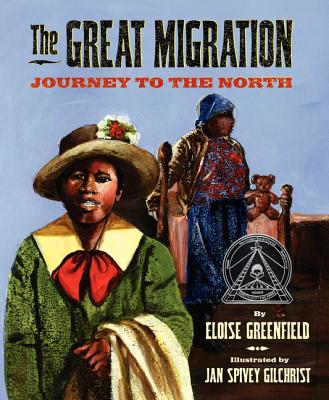 By Eloise Greenfield, Jan Spivey Gilchrist (Illustrator)
This Book Is Not Sold Online - Inquire In Store
Not In Stock/Special Order

We were one family among the many thousands. Mama and Daddy leaving home, coming to the city, with their hopes and their courage, their dreams and their children, to make a better life.

In this beautiful collection of poems and collage artwork, award winners Eloise Greenfield and Jan Spivey Gilchrist gracefully depict the experiences of families like their own, who found the courage to leave their homes behind during the Great Migration and make new lives for themselves elsewhere.

When Eloise Greenfield was four months old, her family moved from their home in Parmele, North Carolina, to Washington, D.C. Before Jan Spivey Gilchrist was born, her mother moved from Arkansas and her father moved from Mississippi. Both settled in Chicago, Illinois. Though none of them knew it at the time, they had all become part of the Great Migration.

The Great Migration concludes with a bibliography.

Eloise Greenfield's love of writing shines through brilliantly in each and every one of her books, which include Honey, I Love and Other Love Poems and How They Got Over: African Americans and the Call of the Sea, both illustrated by Jan Spivey Gilchrist. She is the recipient of the Coretta Scott King Award, the Foundation for Children's Literature Hope S. Dean Award, and the National Council for the Social Studies Carter G. Woodson Book Award. In 2018 she received the Coretta Scott King–Virginia Hamilton Award for Lifetime Achievement. Ms. Greenfield lives in Washington, DC. You can follow her on Twitter @ELGreenfield.

Jan Spivey Gilchrist is the award-winning illustrator-author of seventy-four children's books. Dr. Gilchrist illustrated the highly acclaimed picture book The Great Migration: Journey to the North, winner of the Coretta Scott King Honor Award, a Junior Library Guild Best Book, an NAACP Image Award nominee, a CCBC Best Book, and a Georgia State Children's Book Award nominee. She won the Coretta Scott King Award for her illustrations in Nathaniel Talking and a Coretta Scott King Honor for her illustrations in Night on Neighborhood Street, all written by Eloise Greenfield. She was inducted into the Society of Illustrators in 2001 and into the International Literary Hall of Fame for Writers of African Descent in 1999. She lives near Chicago, Illinois.

Together, the immediate words, striking images, and Greenfield’s personal story create a powerful, haunting view of a pivotal moment in U.S. history even as they show the universal challenges of leaving home behind and starting a new life.
— Booklist (starred review)

Frequent collaborators Greenfield and Gilchrist (Brothers & Sisters: Family Poems) shape an evocative portrait of African-Americans who moved North during the Great Migration between 1915 and 1930 to escape Ku Klux Klan–fueled racism and to secure better lives…[L]ilting poetry and pictures capture a sense of both apprehension and hope…Making intriguing use of photographs of people, news headlines, maps, and painted elements, each of Gilchrist's collages has a distinctive look and lighting, ranging from conventional portraits of the travelers to more abstract images.
— Publishers Weekly

Greenfield's lyricism and her clear, narrative style make this book a solid choice for independent reading and for reading aloud.
— School Library Journal