Essays of E. B. White (Paperback) 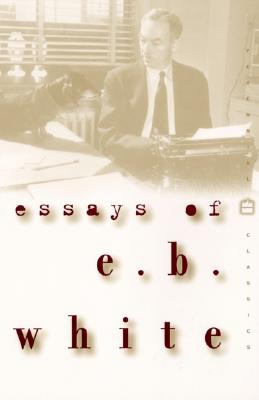 "Some of the finest examples of contemporary, genuinely American prose. White's style incorporates eloquence without affection, profundity without pomposity, and wit without frivolity or hostility. Like his predecessors Thoreau and Twain, White's creative, humane, and graceful perceptions are an education for the sensibilities."  — Washington Post

The classic collection by one of the greatest essayists of our time.

Selected by E.B. White himself, the essays in this volume span a lifetime of writing and a body of work without peer.  "I have chosen the ones that have amused me in the rereading," he writes in the Foreword, "alone with a few that seemed to have the odor of durability clinging to them." These essays are incomparable; this is a volume to treasure and savor at one's leisure.

E. B. White, the author of such beloved classics as Charlotte's Web, Stuart Little, and The Trumpet of the Swan, was born in Mount Vernon, New York. He graduated from Cornell University in 1921 and, five or six years later, joined the staff of The New Yorker magazine, then in its infancy. He died on October 1, 1985, and was survived by his son and three grandchildren.

Mr. White's essays have appeared in Harper's magazine, and some of his other books are: One Man's Meat, The Second Tree from the Corner, Letters of E. B. White, Essays of E. B. White, and Poems and Sketches of E. B. White. He won countless awards, including the 1971 National Medal for Literature and the Laura Ingalls Wilder Award, which commended him for making a "substantial and lasting contribution to literature for children."

During his lifetime, many young readers asked Mr. White if his stories were true. In a letter written to be sent to his fans, he answered, "No, they are imaginary tales . . . But real life is only one kind of life—there is also the life of the imagination."

"His voice rumbles with authority through sentences of surpassing grace. In his more than fifty years at The New Yorker, White set a standard of writerly craft for that supremely well-wrought magazine. In genial, perfectly poised essay after essay, he has wielded the English language with as much clarity and control as any American of his time." — Raymond Sokolov, Newsweek

"Some of the finest examples of contemporary, genuinely American prose. White's style incorporates eloquence without affection, profundity without pomposity, and wit without frivolity or hostility. Like his predecessors Thoreau and Twain, White's creative, humane, and graceful perceptions are an education for the sensibilities." — Washington Post

"The abiding spirit of these essays is humane, compassionate, traditionalistic. No matter what his subject, White always keeps his eye on the long view and the larger perspective. There are times when I feel his work is as much a national resource as the Liberty Bell, a call to the best and noblest in us." — Jonathan Yardley, San Francisco Examiner