Moral Minds: The Nature of Right and Wrong (Paperback) 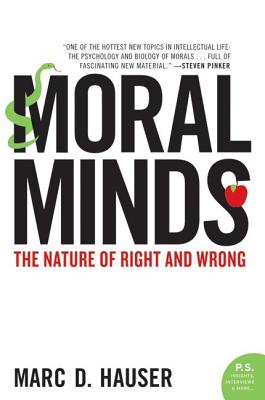 In his groundbreaking book, Marc Hauser puts forth a revolutionary new theory: that humans have evolved a universal moral instinct, unconsciously propelling us to deliver judgments of right and wrong independent of gender, education, and religion. Combining his cutting-edge research with the latest findings in cognitive psychology, linguistics, neuroscience, evolutionary biology, economics, and anthropology, Hauser explores the startling implications of his provocative theory vis-à-vis contemporary bioethics, religion, the law, and our everyday lives.

Marc D. Hauser is the author of the highly acclaimed Wild Minds. He has been featured in the New York Times, USA Today, the Washington Post, the Wall Street Journal, and the Boston Globe, as well as on Today,The Early Show, PBS's Scientific American Frontiers, and NPR. Hauser is Professor of Psychology, Organismic and Evolutionary Biology, and Biological Anthropology at Harvard University, where he is director of the Cognitive Evolution Laboratory and co-director of the Mind, Brain and Behavior Program. He is the recipient of a National Science Foundation Young Investigator Award, a Guggenheim Award, a College de France Science medal, and a Harvard College Professorship chair for his excellence in teaching.

“About one of the hottest new topics in intellectual life: the psychology and biology of morals. . . fascinating.” — Steven Pinker, Professor of Psychology, Harvard University, and author of The Language Instinct and How the Mind Works

“An account of the nature of the human moral organ . . . a lucid, expert and challenging introduction.” — Noam Chomsky, Professor of Linguistics, MIT

“An intellectual feast that provokes thought and should stimulate critical reflection . . . a major contribution to an ongoing debate.” — Peter Singer, Professor of Bioethics, Princeton University

“The most complete attempt to bring together philosophy, anthropology, cognitive science and neuroscience... daring and wise.” — Antonio Damasio, Professor of Neuroscience, University of Southern California

“The scientific exploration of morality has advanced at a breathtaking pace… [an] enjoyable book.” — Daniel Kahneman, Professor of Psychology and Public Affairs, Princeton University, and 2002 Nobel Laureate in Economics

“For a wide audience...a superb overview of one of the hottest topics in the life sciences...a treat.” — Science

“Pathbreaking... relevant to some of the most fundamental contemporary debates in philosophy and public life.” — New York Review of Books