Animation Art: From Pencil to Pixel, the World of Cartoon, Anime, and CGI (Paperback) 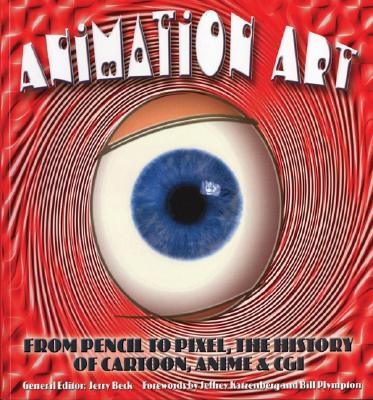 This large format, comprehensive, high quality and visually rich art book covers the history of animation throughout the world, focusing heavily on the North American creative engines of Disney, Warner and now the new, small production CGI houses.The book is divided into world regions to reveal the clear developments in each area, but heavy cross referencing will show the increasing internationalization of animation from the 1930's when the industry and creative imagination of Walt Disney began to infect artists and producers the world over, revealed most recently in The Matrix phenomenon where the bridge between the first and subsequent films, (Animatrix, nine animated shorts), was provided by a pioneering collaboration between US and Japanese animation studios.

Beginning with the earliest in animation, we follow the few individuals who worked on their own to develop techniques that would soon transform animation into a mass-market phenomenon. In recent years, animation has been hugely impacted by the arrival of the computer, seen in films such as Toy Story and Shrek. Computers have pushed animation to the limit by achieving fine, detailed, real-world rendering techniques that challenge the next generation of animators.

General Editor, Jerry Beck, has extensive and senior experience in the film industry, and has become one of the top names in the business. He has written numerous books on animation including I Tawt I Taw a Putty Tat: 50 Years of Sylvester and Tweety (Henry Holt, 1991). Beck has taught at UCLA and conducted seminars for the American Film Institute, New York University, and at the School of Visual Arts. He has been an animation consultant for Walt Disney Television Animation, has compiled many collector's editions of cartoons for Columbia House, VCI Entertainment, and even formed Cartoon Research Co. to write books, consult on animation projects, and various other supply methods for cartoons, new features, and TV series.

“How can you not admire such an ambitious project that dares to chronicle the evolution of animation?”
— Animation Magazine