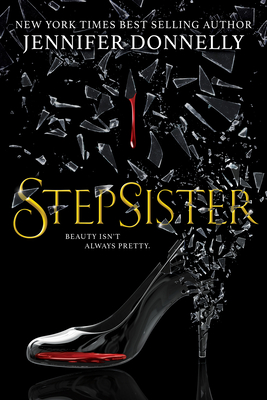 “Isabelle should be blissfully happy – she’s about to win the handsome prince. Except Isabelle isn’t the beautiful girl who lost the glass slipper and captured the prince’s heart. She’s the ugly stepsister who’s cut off her toes to fit into Cinderella’s shoe ... which is now filling with blood.

Isabelle has tried to fit in. To live up to her mother’s expectations. To be like her stepsister. To be sweet. To be pretty. One by one, she has cut away pieces of herself in order to survive a world that doesn’t appreciate a girl like her. And that has made her mean, jealous, and hollow.

Until she gets a chance to alter her destiny and prove what ugly stepsisters have always known: it takes more than heartache to break a girl.”

In her unapologetically feminist novel, Donnelly confronts demand for females to be beautiful, the way society belittles those who are “ugly,” the history of how women weren’t allowed to get an education, the concept of pitting girls against each other, the power of courage and bravery, and the right to make our own destiny rather than relying on fate or chance.  The representation of these principles is skillfully done, provoking empowering thought and leaving an impact on the reader.

Isabelle is both a complex character and a powerful female lead who may not be perfect and sweet, but is defiant and heroic in her own way.  Not only is she a character readers can look up to, but one who has struggles and insecurities many can find relatable. Isabelle isn’t the only complex character either-nearly everyone in Stepsister is comprised of a multitude of layers-both beautiful and ugly ones-beneath who they appear to be upon first impression.

If you like dark, twisted retellings or just an empowering read, pick up Stepsister by Jennifer Donnelly.

Stepsister is available in stores now!