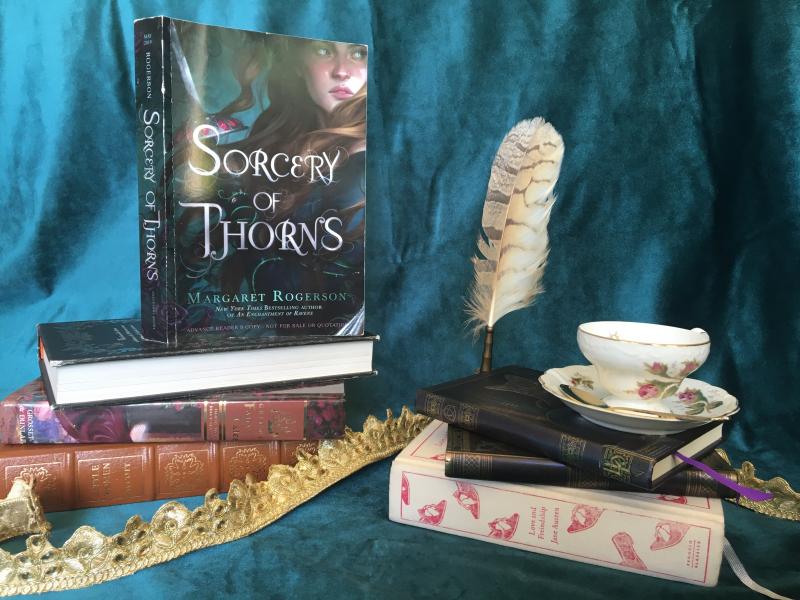 The Great Library of Summershall has been home to Elisabeth Scrivener for as long as she can remember. Left at its doorstep as a small child, she has grown up with its winding rows of shelves and mysterious grimoires - rare books of magic with a dangerous tendency to come alive - raised with the knowledge that if she is competent enough, she may one day attain the coveted status of a warden. Everything she knows she’s been taught by the Library’s keepers - including the essential, fundamental knowledge that all sorcery and magic are evil, no matter what kind, and that any association with either will lose Elisabeth the possibility of ever becoming a warden.

Elisabeth has never questioned this fact - that is, until she meets the mysterious Nathaniel Thorn. At first, he seems to be every bit the wicked sorcerer that the librarians warned of, allegedly performing unspeakable rituals with demons in exchange for magical power. Shocked, Elisabeth forces herself to forget their interaction entirely, assuming it to be the only time the two will ever meet.

How very wrong she is.

When a dangerous incident with one of the grimoires at the Great Library is blamed on Elisabeth, she’s sent off to the capital to be tried by some of the kingdom’s greatest sorcerers, escorted by none other than Nathaniel Thorn. But the world outside of the Great Library is entirely foreign to Elisabeth, with perhaps the greatest shock being that magic isn’t condemned by all as wicked - in fact, it is revered and valued by most. And as Elisabeth gets to know Nathaniel better, she begins to see that he is more than the corrupt sorcerer she imagined him to be….in fact, she connects with him on a level that she would have before considered impossible.

But matters are much more complex than either of them could ever have fathomed, and as Nathaniel and Elisabeth are drawn into a scheme for power that could throw the realms of magic and humanity into chaos, she will have to question everything she’s ever been sure of about magic - and herself - in order to save the world that she loves from destruction.

With an expert pen, Margaret Rogerson deftly crafts a universe of magic and mystery that will leave readers spellbound. Her writing is irresistible, sprinkled with plot twists and subtle wit that will keep readers turning page after page until the very end. The magical Victorian world in which Elisabeth lives is rich and convincing, filled with just the right amount mystery and wonder to keep the characters - and readers - guessing as to what will happen next, and the novel’s romance is exquisite and sweet. But to me, this intoxicating mix wasn’t the crowning glory of the book - that came in the form of Elisabeth Scrivener, the courageous, passionate, determined, book-loving heroine who’s willing to go to any lengths to help those for whom she cares. Her struggles are very real and relatable to almost anyone, and readers will be sad to leave her come the last page of the novel - I certainly was. On the whole, A Sorcery of Thorns is perfect for fans of high fantasy, mystery, romance, and, of course, unforgettable, book-loving heroines.