**Most of these displays feature an array of age ranges, not all appropriate for young readers, so a list of YA specific books will be listed at the end of this post.** 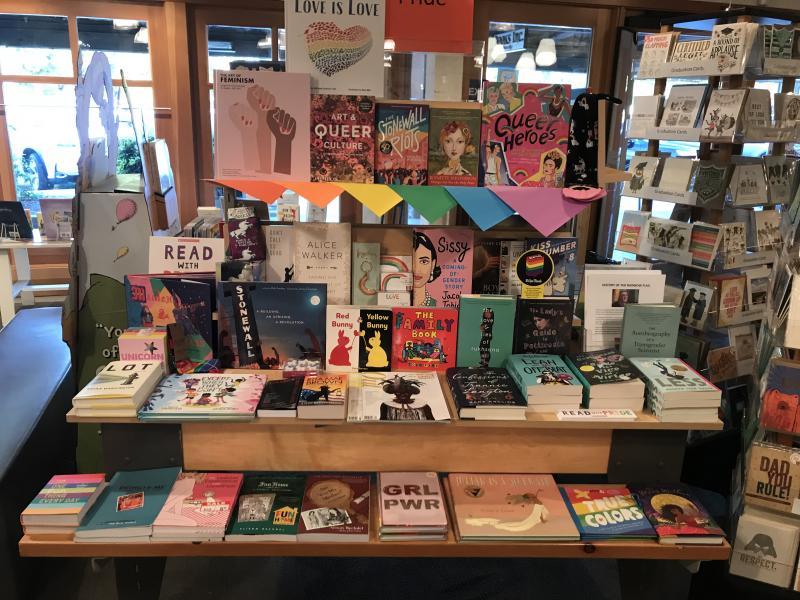 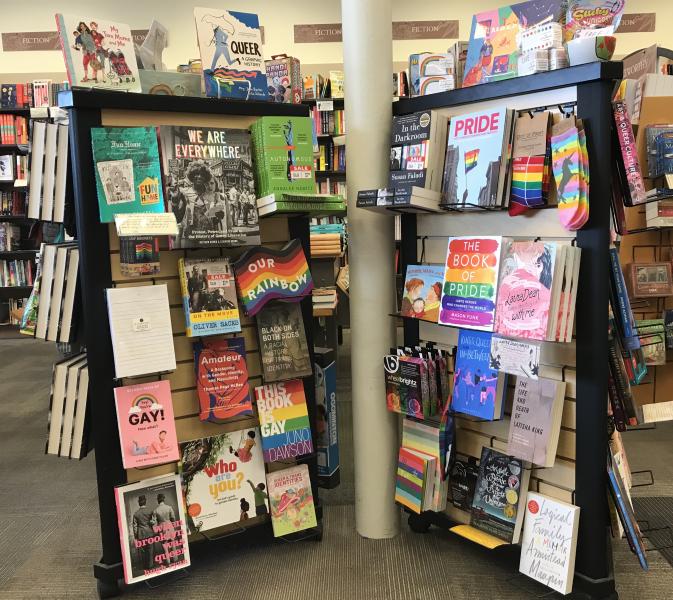 My to Moms and Me by Michael Joosten and Izak, Queer: A Graphic History by Meg-John Barker, Fun Home by Alison Bechdel, We Are Everywhere: Protest, Power, and Pride in the History of Queer Liberation by Matthew Riemer and Leighton Brown, Autonomous: A Novel by Annalee Newitz, a Note Pad, On the Move: A Life by Oliver Sacks , Our Rainbow by Little Bee Books,  Yay! You're Gay! Now What What?: A Boy's Guide to Life by Riyadh Khalaf, Amateur: A Reckoning with Gender, Identity, and Masculinity by Thomas Page McBee, Black on Both Sides: A Racial History of Trans Identity by C. Riley Snorton, This Book is Gay by Juno Dawson, When Brooklyn was Queer: A History by Hugh Ryan, Who Are You?: A Kids Guide to Gender Identity by Brook Pessin-Whedbee, A Quick & Easy Guide to Queer & Trans Identities by Maddy G. and J.R. Zuckberg

RAINBOWS, Maiden & Princess by Daniel Haack and Isabel Galupo, In the Darkroom by Susa Faludi, PRIDE: Fifty Years of Parades and Protests from the Photo Archives of the New York Times by The New York Times, Socks, Mommy, Mama, and Me by Leslea Newman, The Book of Pride by Mason Funk, Laura Dean Keeps Breaking Up With Me by Mariko Tamaki and Rosemary Valero-O'Connell, Rainbow Bike Lights, Kings, Queens, and In-Betweens by Tanya Boteju, The Life and Death of Latisha King: A Critical Phenomenology of Transphobia by Gayel Salamon, Do One Fun Thing Everyday journal, Aristotle and Dante Discover the Secrets of the Universe by Benjamin Alire Saenz, Logical Family: A Memoir by Armistead Maupin 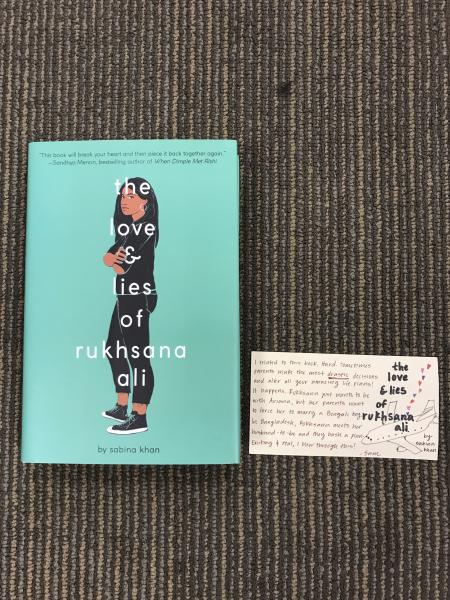 Review: "I related to this book. Hard. Sometimes parents make the most drastic decisions and alter all your amazing life plans! It happens. Rukhsana just wants to be Ariana, but her parents want to force her to marry a Bengali boy. In Bangladesh, Rukhsana meets her husband-to-be and they hash a plan. Exciting and real, I blew through this." - Sam 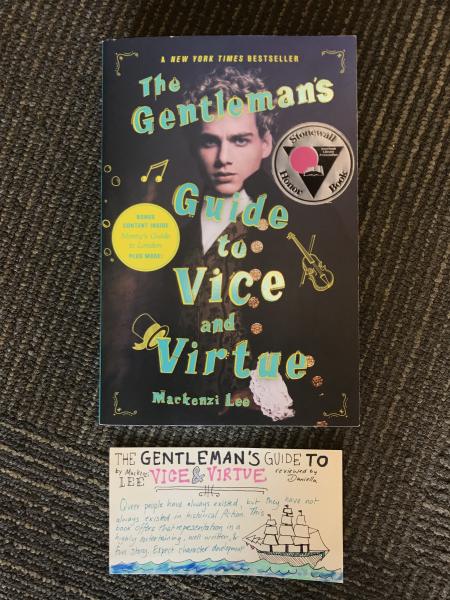 Review: "Queer people have always existed, but they have not always existed in historical fiction. This book offers that representation in a highly entertaining, well written, and fun story. Expect character developement!" - Danella 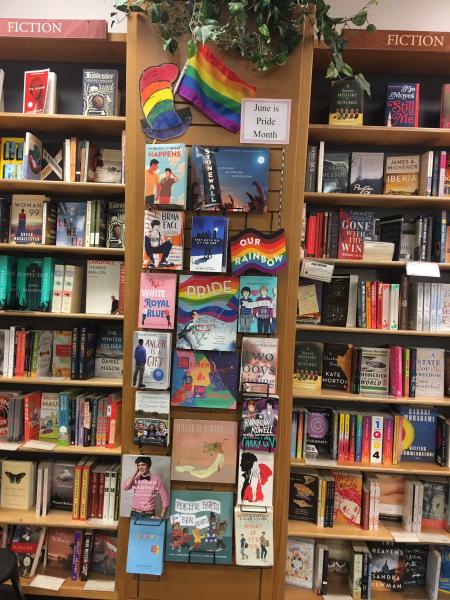 Starting from top left: The Music of What Happens by Bill Koinsberg, Stonewall: A Building. An Uprising. A Revolution by Rob Sanders, Brave Face: A Memoir by Shaun David Hutchinson, They Both Die in the End by Adam Silvera, Our Rainbow by Little Bee Books,  Red, White & Royal Blue by Casey McQuiston, Pride: The Story of Harvey Milk and the Rainbow Flag by Rob Sanders, Hold My Hand by Michael Barakiva, Anger is a Gift by Mark Oshiro, Maiden & Princess by Daniel Haack and Isabel Galupo, Two Boys Kissing by David Levithan, The Miseducation of Cameron Post by Emily M. Danford, Julian is a Mermaid by Jessica Love, Carry On by Rainbow Rowell, Beyond Magenta by Susan Kuklin, The Love Interest by Cale Dietrich, Boy Meets Boy by David Levithan, Peacful Fights for Equal Rights by Rob Sanders, What If It's Us? By Becky Albertalli and Adam Silvera 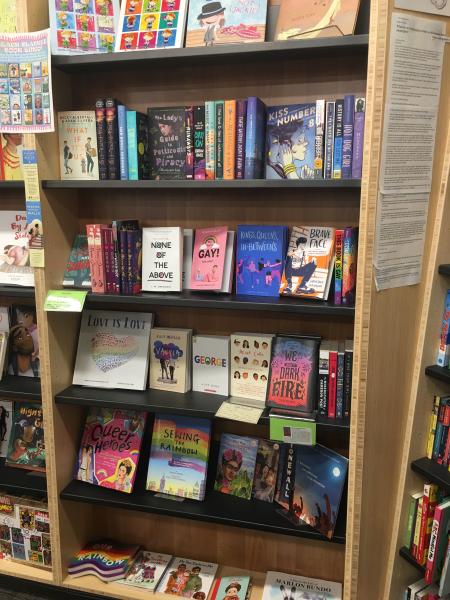 Row 2: What If It's Us? By Becky Albertalli and Adam Silvera, Girls of Paper and Fire by Natasha Ngan, Her Royal Highness by Rachael Hawkins, The Gentleman's Guide to Vice and Virtue by Mackenzie Lee , The Lady's Guide to Petticoats and Piracy by Mackenzie Lee, Runaways by Christopher Golden, Carry On by Rainbow Rowell, The Music of What Happens by Bill Koinsberg,The Love and Lies of Rukhsana Ali by Sabina Khan, The Meaning of Birds by Jaye Robin Brown, These Witches Don't Burn by Isabel Sterling, The Princess and the Fangirl by Ashely Poston, Kiss Number 8 by Ellen T. Crenshaw, Will Grayson, Will Grayson by John Green and David Levithan, They Both Die in the End by Adam Silvera, History Is All You Left Me by Adam Silvera, Hot Dog Girl by Jennifer Dugan, Huntress by Malinda Lo

Row 4: Love Is Love by Michael Genhart , Vanilla by Billy Merrell, George by Alex Gino, Meet Cute by Jennifer L. Armentrout, et al., We Set the Dark on Fire by Tehlor Kay Mejia, The Miseducation of Cameron Post by Emily M. Danford, Simon vs. the Homo Sapiens Agenda by Becky Albertalli, Felix Yz by Lisa Bunker, If I Was Your Girl by Meredith Russo

The Stonewall Riots: Coming Out in the Streets (Hardcover)

The Love and Lies of Rukhsana Ali (Hardcover)

The Lady's Guide to Petticoats and Piracy (Montague Siblings #2) (Hardcover)

The Gentleman's Guide to Vice and Virtue (Montague Siblings #1) (Paperback)

Leah on the Offbeat (Paperback)

Yay! You're Gay! Now What?: A Gay Boy's Guide to Life (Paperback)

The Music of What Happens (Hardcover)

They Both Die at the End (Paperback)

Anger Is a Gift: A Novel (Paperback)

What If It's Us (Hardcover)

Girls of Paper and Fire (Hardcover)

The Music of What Happens (Hardcover)

The Meaning of Birds (Hardcover)

The Princess and the Fangirl (Once Upon A Con #2) (Hardcover)

They Both Die at the End (Paperback)

History Is All You Left Me (Paperback)

The Prince and the Dressmaker (Paperback)

None of the Above (Paperback)

We Set the Dark on Fire (Hardcover)

If I Was Your Girl (Paperback)